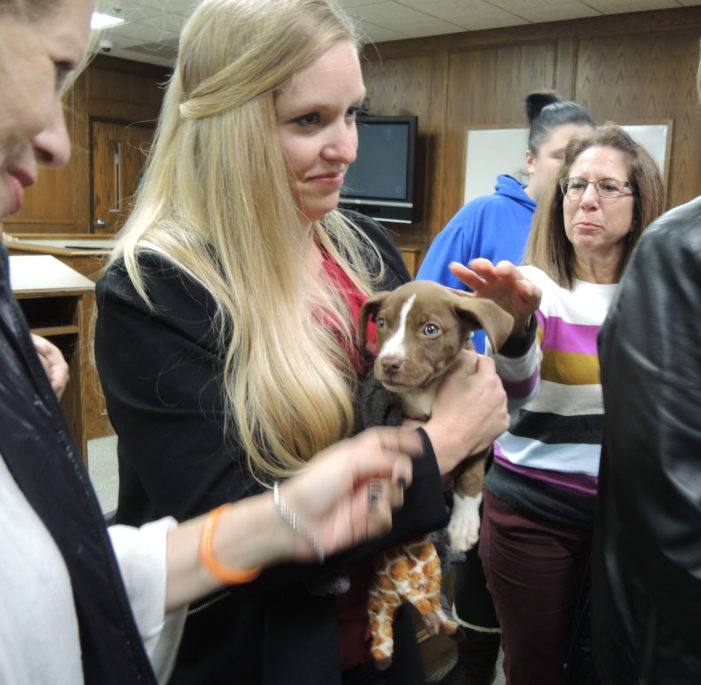 Wellwishers gathered in the courtroom to support Rumble and his caregivers during the sentencing. Photos by Phil Custodio BY PHIL CUSTODIO Clarkston News Editor Rumble the puppy sat quietly in court, his head gently stroked by foster caregiver Gretchen Terpening. Trisha Plovie, president of Canine Companions Rescue Center of Clarkston, was there to speak for […] 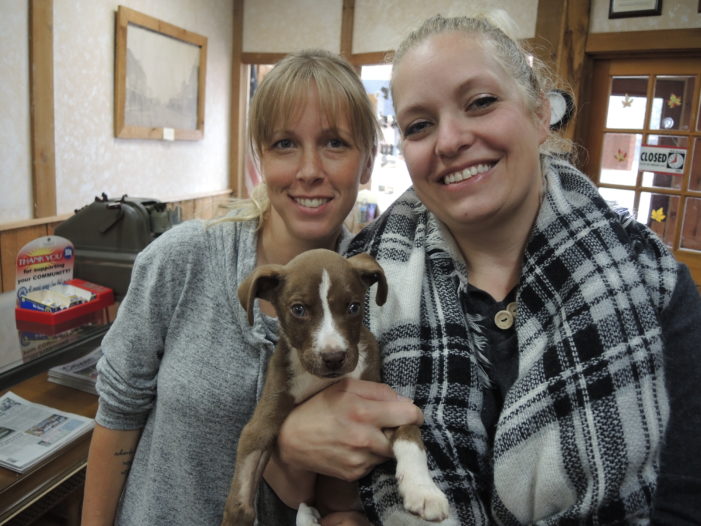 Team Rumble, Erica McCarthy and Gretchen Terpening of the Canine Companions Rescue Center of Clarkston, with Rumble the dog. Photo by Phil Custodio Volunteers head to court as they help puppy recover BY PHIL CUSTODIO Clarkston News Editor When the couple accused of abusing and abandoning Rumble the dog go to court later this month, […]

PHIL IN THE BLANK: Hope for animals

I was a bit star struck last Wednesday when Erica McCarthy and Gretchen Terpening of the Canine Companions Rescue Center stopped by the office last Wednesday, along with Rumble the dog in his little red coat (due to his injuries, he can’t regulate his body temperature properly). The puppy’s rescue from abuse and neglect struck […]

BY KIRSTEN ISBELL Clarkston News Intern Writer Rumble the dog has come a long way in a short time. The 5- or 6-week old puppy was found dumped in the bushes at Sashabaw Mobile Homes, covered in maggots and clinging to life. A concerned citizen found him, July 24, and immediately called the Canine Companions […]

Show care for pups at Cupids and Canines

Erica McCarthy, operations manager for Canine Companions Rescue Center, at left, and Lori Lammon, board member, with some of their dogs in need of homes, Gizmo, a blind, senior Shih Tzu, and puppies Chloe and Lincoln. Photo by Phil Custodio BY PHIL CUSTODIO Clarkston News Editor Animal aficionados are asked to show their love by […]

For football fans, there’s no bigger annual event than the Super Bowl. But for canine lovers, it’s the Puppy Bowl. This year, an Oakland County pooch will be part of the mock gridiron action. Brooklyn is one of 49 dogs selected to be in the starting lineup for ‘Puppy Bowl XII,? which will air from […]

An area housecall veterinarian is sponsoring a charity golf outing to raise money for two groups that rescue dogs. The event is called Putts for Paws and it will be held on Sunday, Sept. 13 at Devil’s Ridge Golf Club (3700 Metamora Rd.) in Oxford Township. Proceeds will be split 50/50 between the Oxford-based K-9 […]

When Paul Barr says he’s been to the mountaintop, it’s not just a figure of speech. At approximately 6 a.m. Wednesday, July 1, he reached the summit of Mount Kilimanjaro in the African nation of Tanzania. ‘It was everything I thought (it would be) and more,? said the 47-year-old owner of the Oxford Yoga Studio, […]

Yoga instructor to climb a mountain for homeless dogs

Some people write checks to support their favorite causes. Some people roll up their sleeves and do volunteer work. Paul Barr is planning to literally climb a mountain. ‘I’m a big believer that we can do whatever we put our minds to,? said Barr, owner of the Oxford Yoga Studio located at 18 N. Washington […]

Tails and Trails with Canine Companions

For Canine Companions Rescue Center of Clarkston, Tails and Trails Walk-A-Thon and Adoption event will also be a reunion. “It’s kind of a reunion for dogs and the fosters who raised them,” said Connie Fleck of Independence Township, who founded the group with her husband Carl in 2004. “It helps them renew relationships with puppies […]