When the stars align just right, miracles can happen

By Kate Konczal,
Independence Township Building Department
Merriam-Webster defines Predestination as “the belief that everything that will happen has already been decided by fate and cannot be changed.”
There have been very few times in my life  where I have been rendered speechless. Totally, utterly and shockingly speechless.  Thursday, November 10  was one of those times and I believe predestination had something to do with it.
I had just written an article for The Township Times about an elderly man and woman driving in a vehicle I pulled up to. Their car had World War II Veteran  stickers adhered to the rear hatch.  In the article, I described this day dream I was pulled into and concluded with why it is important to always remember our Veterans. The piece was of a personal nature and I never once imagined how a few words would turn my life into an emotional whirlwind.
On Wednesday, the November 9  edition of The Clarkston News (which contained my article) began to land in homes.
On Thursday, November 10, while sitting at my desk in the Building Department, I went to answer a phone call like I do 50 times a day.
“Good Afternoon, Building Department”
“Hello” said the voice on the other end. “Is there a Kate Konczal in your department?”
“This is Kate.”
“Kate, my name is Steve Kennedy and you put a picture of my car in the newspaper.”
I was instantly speechless and fumbled for words as though I was giving my first speech in high school. The volume of my voice increased, my heart started beating a little faster and I had what some would diagnose as “perma-grin.” As my conversation progressed, I learned the inspiration of my article did in fact reside in Independence Township and, as you can imagine, was quite surprised when he saw a picture of his vehicle in the newspaper.
We chatted for a few more minutes, I thanked him for the call  and the conversation came to an end.   After hanging up, I jumped out of my seat anxious to share my experience with anyone who would listen.
The next day, Friday, November 11, was Veteran’s Day. Dressed in a United States Marine Corps baseball jersey, I headed to work (excited it was Friday), still energized from the previous day’s events.  I wasn’t at my desk 20 minutes when a gentleman appeared at the counter wearing a World War II Veteran’s cap. He politely said “I am looking for Kate?”  Absolutely dumbfounded I replied, “You found her,  are you Mr. Kennedy?”
Sure enough, he was standing right in front of me. I quickly left my chair to run  around the counter  and in mid-step asked if I could please give him a hug. He opened his arms and I dove right in, not for a moment considering if I was making a spectacle of myself because I honestly, did not care.
We stood at the counter for some time chatting. He had his beautiful wife, Barbara, with him (I hugged her, too) and they were out and about enjoying some of the acknowledgements of Veteran’s Day by local businesses. They stopped in to not only meet me in person but to graciously thank me  for “my kind heart” and the beautiful article that has deeply touched their entire family.
While standing at the counter,  I learned he was in fact stationed in the Pacific Theater with stops on Saipan, Guam, Okinawa and Nagasaki. After the war he pursued his education in Economics, became a husband and together with his wife, Barbara, raised a large family that included not only their children, but multiple foster children and the selfless adoption of a special needs child. His career in business was vast and retired as a Senior Executive with Crowley’s Department Store in 1989.
The visit ended with more hugs and a promise to stay in contact along with a feeling inside myself of total euphoria.  When I got home that evening I sat with my husband at our kitchen table and cried like a baby. There were so many things I wanted to say but could only come up with, “I think this man has changed my life forever.” My husband  simply  smiled and  held my hand.
On Monday afternoon when I got back in the office after lunch, there was something waiting for me on my computer keyboard. Mr. Kennedy had stopped while I  was out and left me his  World War II Veteran  hat  with his Division pin  fastened to it. This priceless gift that has been given to me is from a man who can be described in one word. Magnificent. 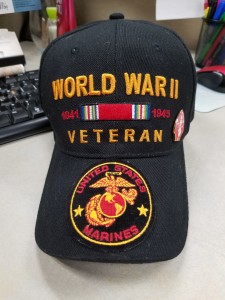 This man was introduced to me because of a few stickers on the back of a car. He had no name, I had no idea where on Earth he lived and figured there had to be little chance he would actually see my article, right? Wrong.
Somehow everything seamlessly fell into place. Lunch breaks were taken at the right time, The Township Times printed in the right week, the correct eyes read the article and two people with more than 53 years separating them unknowingly became a part of each other’s lives.
The opportunity to share a few words in a newspaper has resulted in the greatest gift I could have ever hoped for. Not only was I able to acknowledge a large group of people who often feel forgotten,  but I met and befriended a man  whose  life story has enriched my own life in a profound way. I have been reminded why it is so important to say thank you, how a simple smile can positively alter someone’s day, good things are ALWAYS possible and no matter how young or old you feel, there are people in this world just waiting to become your friend. Whether they know it yet or not.

When the stars align just right, miracles can happen added by Don Rush on December 15, 2016
View all posts by Don Rush →