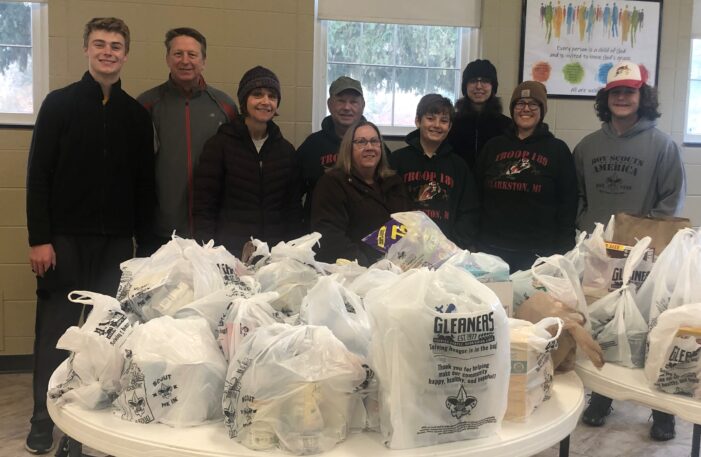 By Brandon Kathman
Special to the Clarkston News

Scouts from the Clarkston area helped make the 2022 Scouting for Food drive, which is held across southeastern Michigan between November and December, a success, with over 46,000 pounds of food collected for charities in Oakland County alone.
“While our drive has concluded in Clarkston and Oakland County, we still have food to collect elsewhere in Michigan,” project coordinator Bob DeWar said. “With that said, local Scouts have given us a great start.”
Between Nov. 5 and Nov. 13, thousands of Scouts distributed special grocery bags to homes across Oakland County, requesting that they be filled with nonperishable essentials and placed on doorsteps for pickup. A week later, those same youth returned to collect on behalf of numerous nonprofits. Youth from Clarkston Troop 189, Pack 163 and Pack 185 were among those participating.
“We collected 70 bags of food for the Clarkston United Methodist food pantry,” Troop 189 Committee Chair Sherry Snudden reported, as Troop 189 youth sorted the food. “Make that 72 bags.”
DeWar estimated that the Clarkston units collectively assembled around 2,000 pounds of food.
While Troop 189 supported the church’s pantry, Pack 185 donated their haul to Gleaners Community Food Bank. Pack 163 gave the food their youth collected to the Lighthouse pantry.
“We’re so proud of all that our young people have accomplished so far this year,” DeWar said. “As a parent, I was able to watch my own son and daughter participate, and that means the world to me. As we watch each truckload of food arrive at the collection sites, we can also watch our children learning valuable life lessons.”
The 2022 Scouting for Food initiative officially concluded with a final collection in the Thumb, which takes place every December.
For more information about local Scouting, including upcoming events and how to join a local unit, visit michiganscouting.org.