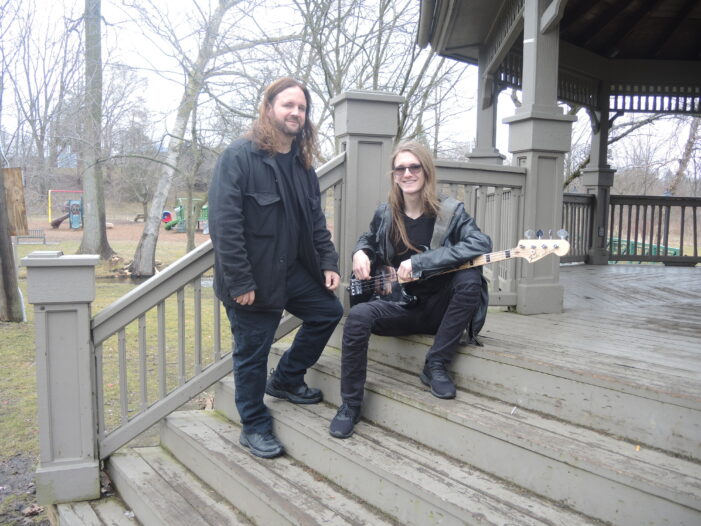 BY PHIL CUSTODIO
Special to the Clarkston News

Local rocker Ron Tippin spent a year creating his band Widetrack’s newest album, The Unwakening. For the first time, he had a collaborator – his son, Zach Tippin.
“It’s just been a really nice symbiotic kind of thing where we’re checking each other’s stuff out,” said Ron, who performs lead vocals, drums, and guitar. “People tend to be territorial about their musical tastes, but when it’s your son, you can be more open. Fortunately, he’s likes quality musicianship and so that’s the catalyst for a lot of stuff.”
“As far as music goes, a lot of it’s just sitting on a couch and jamming, picking out stuff real slowly until you have a cohesive, three-minute chunk of a song,” said Zach, 16, who will be an 11th grader at Rochester High in the fall.
The name of the band comes from a road near Ron’s home in Pontiac when he was making demos for their first album, around 2004.
“We’re putting out our fourth album and it’s a satisfying thing, because it’s really difficult to even put out one album, to create it all yourself,” he said. “I spent an entire day and night just doing the art layout and trying to figure out how to upload all that stuff. Just getting all these skills, trying to figure out how to market myself on the internet. Hopefully, that expands into something more than just, hey, here’s a band playing songs. We had a conversation a while back about how good music seems to be dying out. What we’d really like is to just kind of bring in a little bit of light to it, spread some awareness about things we like, inspire something. I think that’s the ultimate goal.”
Widetrack’s sound is inspired by Soundgarden, Porcupine Tree, and Pink Floyd, as well as metal and progressive rock from the ’80s and ’70s. The band released their self-titled debut album in 2007, followed by Widetrack II in 2009, and Widetrack III in 2018. All three albums were co-produced by Andy Patalan, guitarist for ’90s grunge-rock band, Sponge.
“In 2006, after my father (Bruce Tippin) passed away from cancer at the young age of 57, I decided to stop making excuses and put out the first Widetrack CD,” Ron said. “Life’s too short, so I was going to go for it.”
Zach joined the band as bassist at the age of 12 at his own request.
“He (Ron) never really put anything on me,” Zach said. “He never said, ‘oh, you should do music.’ He encouraged me to do whatever I wanted. I think I was maybe 8 or 9 when I decided to try playing guitar. I’d hold guitars and pretend to be a rock star. I really enjoyed sitting around, taking lessons a little, delving into this myself. That’s really where the majority of the enjoyment I got from it came from.”
“It’s how I teach,” said Ron, a music teacher at McCourt’s music in Waterford. “If you want to do it, then you don’t need to be talked into it. You can’t be talked out of it.”
It was cool to invite Zach to join the band, Ron said.
“In a really fast period of time, he passed me up. Like, by leaps and bounds,” Ron said. “So we had him join our cover band and now he’s out doing gigs with us all the time. I don’t want to limit his options here so this might be just a little time capsule, something really wonderful, or it could be something that grows. We’re just open to things as they come up.”
Zach participates in jazz band and theater at school, and said the creative arts will be included in whatever he does in the future.
“Even if my name isn’t in shining lights, I’ll still be making a living with art, teaching, or performing at parties or weddings, whatever, that’s all music to me and that’s the essence of it,” he said. “After I graduate, I’ll just roll with the punches. Who knows what’s going to happen.”
Ron has been a singer, songwriter, and drummer most of his life. His musical journeys to Nashville and Los Angeles over the years taught him hard lessons about the importance of making music.
“The most fun is making music that didn’t exist before,” he said. “You hear people say, well, this is what’s popular so you have to tailor your music around that. For us, it’s quite the opposite. It’s the artistry of it for us.”
Beginning in January 2019, the father-son team wrote, recorded, and released one new song each month, marking Zach’s debut as a songwriter and recording engineer, as well as the first time Ron had written Widetrack music with another person.
The band was in the process of booking live dates throughout 2020, but those plans have been put on hold, due to the current pandemic crisis. In the meantime, they are looking into live streaming performances.
“We decided from this point we’re going to take our time,” Ron said. “We have plenty of music to play so we’re going to take our time with songs and live with them for a while, leave them alone and work on other things, then come back and say, we still like this. I think that’ll benefit a lot in terms of the music.”
For more information, check Widetrackband.com.