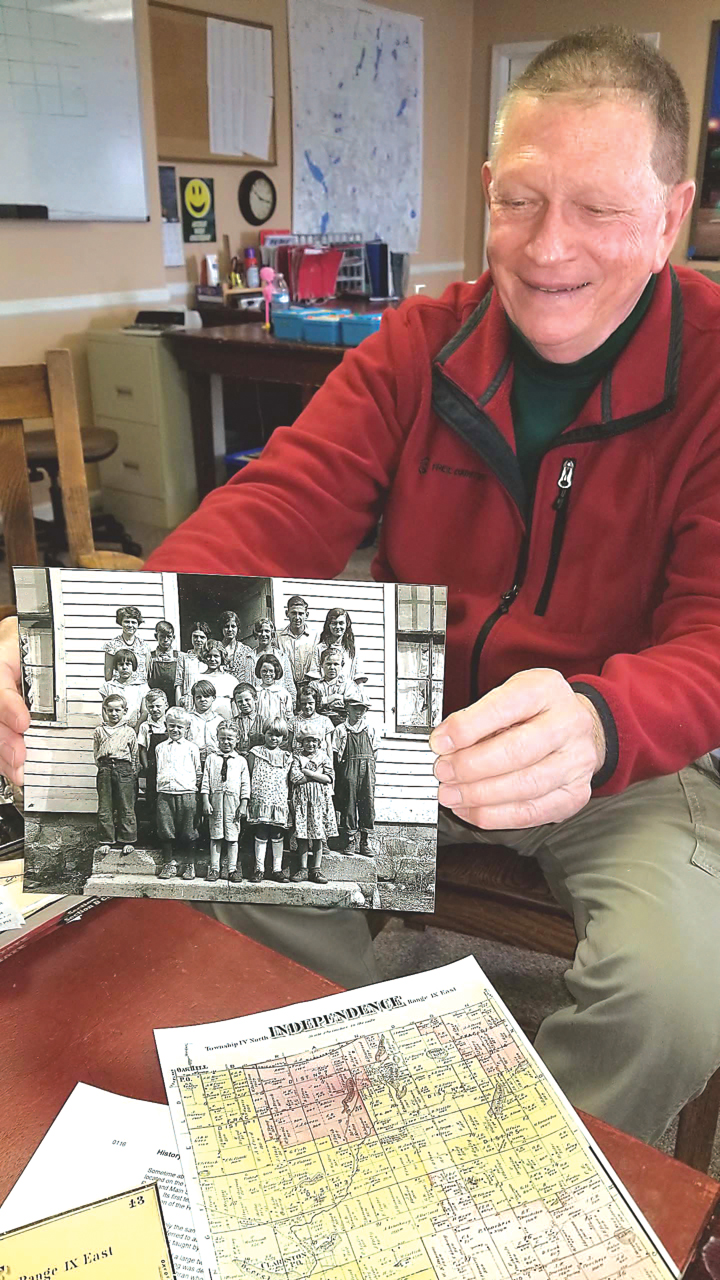 George White holding a picture of students in front of the then Bailey Lake School. The picture was taken in 1931. In the picture are both White’s mother (Martha, in middle back) and her twin, George Miller (second from the left in back). Photo by Don Rush

After reading The Clarkston News’ series on former Clarkston Community Schools leader Mel Vaara, life-long area resident and 30-year CCS employee came to our office with some thoughts to share.

By Don Rush
With the latest news Clarkston Community Schools are “opening” enrollment to students living outside the district (see ‘Ahead of the curve with open enrollment’ published on April 25, 2019), the district is contending with something prior administrations didn’t have to deal with — namely a shrinking student population.
George White, who will be 73 later this month, has long ties to the district. “I am the sixth generation in my family to be from Clarkston; my kids are the seventh and grand kids eighth generation,” he said one day while visiting The Clarkston News office at 5 S. Main Street, downtown.
“I was at the beginning of the ‘baby boomer’ generation,” White said. “This was a time of growth in the district. There were a lot of kids being born. Post War (World War 2) the district, under the leadership of Superintendent Dr. Greene, had to build schools as fast as they could. Today’s challenge for the district is dealing with a shrinking school population — they have to figure out how to get more kids into Clarkston Schools.”
Last month, the board of education approved open enrollment for “specialty academic” programs for students pursuing band, choir, and orchestra and in the Construction Technology program. Open enrollment is for grades 6-12.
According to the history of the Clarkston Community School District, in 1949 there was a successful campaign to consolidate rural districts within Independence and Springfield townships into one district. In 1951, Dr. L.F. Greene was hired on as superintendent.
White worked for the district from 1968, starting as a high school biology teacher, then assistant principal at Sashabaw Junior High, with stints as principal at both Pine Knob and North Sashabaw elementary schools. He retired in 1998.
He came to the office with a file folder filled with a little of his family’s history, a little of the district’s history, and a couple maps of Independence Township from the late 1800’s showing all the little school districts in the township.
“When I started high school, my class was the first to go a full four years in the new high school (now Clarkston Junior High School). My class of 1964 graduated 140 students. The Class of ‘65 had grown by 100,” White said.
Some of the information White shared also helped clear up why Bailey Lake Elementary is located on Pine Knob Road, North Sashabaw Elementary is on Maybee Road and Pine Knob Elementary is located on Sashabaw Road.
“They (past school boards) tried to keep the names of the schools tied to the history of the community,” he said. “Many of the schools were named after the families who owned the property where there schools were built — like Bailey Lake Elementary.”
The original Bailey Lake School was further north on Pine Knob Road at Whipple Lake Road. The property was owned by the Bailey family.
Later in the district’s history, property south (where the school is now) was sold to the district by White’s ancestors — the George Miller family.
According to White, back in the day of the rural and fractional school districts, kids would go to their “community” school from kindergarten through the eighth grade. Starting in the ninth, they would go to Clarkston High School. His mother, Martha Miller graduated from Bailey Lake School in the eighth grade in 1929, and from Clarkston High School in 1935.
To see a  map like the one White referred to, go to the website CLICK HERE

A little local history with Mr. White added by Don Rush on May 1, 2019
View all posts by Don Rush →