Some kids wanted BB guns, I wanted a camera 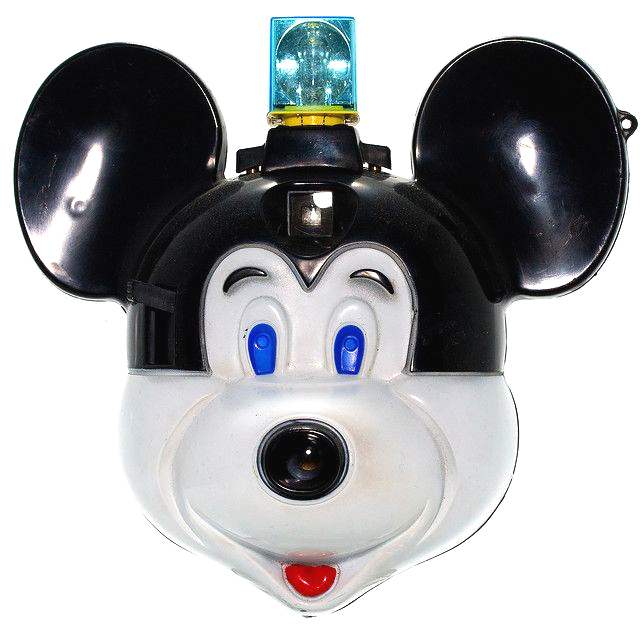 Hey, I found what the Mickey Mouse camera looked like online!

Cameras have always fascinated me. 1 have cameras all over the house. Some work, some don’t and they come in all shapes and sizes. Some have polished wood and brass mechanisms. Some fold up into a big leather box, others have metal casings or plastic parts. But, they are all fascinating. (Well, I used to have all sorts, now I have less, since being broken into about nine years ago.)
I like the way cameras look, I like the way they sound – well, the way they used to sound before everything went electronic. (I do like having a phone with my camera, however, as it’s super convenient.)
On the old cameras the sound of the shutter shutting, internal mirrors flapping, springs and gears doing their thing came together with a single harmonious “click.”
Depending on the sound of that click, you could tell if your old, mechanical camera was set correctly. If it sounded right, chances were the picture would turn out okay.
The new-fangled, phone/computer gizmos all take great pictures these days; they’re handy, can fit in your pocket and they look nifty (when’s the last time you read that word?), but I still like the bulk and heaviness of an old 35 mm resting in my left palm. I loved putting the camera to my left eye,seeing the frame filled with the moment I’m trying to capture, focusing and taking the shot.
When this love affair with the camera began, I cannot recall, but I do remember writing Santa the winter of 1968, asking for one. And, that right jolly old elf, Santa, came through with flying colors. Yup, under the tree, with a tag made out to me, was a shiny new plastic Mickey Mouse Head Camera.
Man, that was a magical Christmas!
That was the year I actually saw Santa’s sleigh being pulled by Rudolph the Red-Nosed reindeer (which back then we watched on a black and white TV). It was Christmas Eve and sometime around midnight the Rush Clan’s tan, 1965 Buick Skylark pulled up in front of our red-brick and white sided home on the corner of Berwyn and Orangelawn. My five-year-old self and sister Barb were asleep in the back seat. Baby Patricia was just as asleep in Mom’s arms. (Yes kids, as strange as it may sound there was a time when the roads were so safe, that nobody used seatbelts, car seats or any other safety devices which might have prevented injury.)
When Dad picked me up to take me inside I remember opening my eyes. It was cold and crisp. There was snow on the ground and it was a clear, clear night. I looked up at the stars in the darkness, and right there, above our Redford Township home I saw it. By gosh and by gomie and sure as heck I saw a tiny flickering red light flying magically high above.
Rudolph!
It had to be.
So, I told Dad I see Santa — which was a good thing, because earlier in the night Grandpa McDonald said if Rudolph landed on his roof he’d shoot him for Christmas dinner. Rudolph had survived!
Dad said we had to hurry up and get inside and to sleep so St. Nick wouldn’t pass us by. I don’t know if I stayed awake a moment longer. I do remember getting up before the sun, rousting Barb out of the bunk below mine and running to the front room to see if indeed Santa had passed as by.
Up to the Christmas tree we ran, and there in the early morning darkness we stood in amazement. Presents! Beautiful presents, all packaged in red and green paper. Maybe we were giggling too loud, or excitedly singing praises to the big guy in red. Whatever the case, our merriment caused Dad to awake. He staggered out of his and Mom’s bedroom and out into the hallway.
‘‘Go back to bed, it’s too early to open presents,” was all he mumbled before staggering back into the parental cave.
Whether Barb, 4 and I heeded our father’s words, I really can’t recall. I do know, when it was finally time to open presents we went at it with gusto. Fervent believers in the power of Santa (Christmas? Christ, the son of God? Jesus who?) ripping through colored paper and cellophane tape for the promised treasures within.

I can honestly say, I do not remember any other present Santa left for me that year, save for the plastic Mickey Mouse Head camera. I still have the camera (it survived the afore mentioned home invasion.) And, I believe somewhere I still have some of the pictures I took that Christmas. I remember Dad stopping the Buick at a store to get flash cubes and 120 film for my new and very first camera, on our way down to Grandma Rush’s Detroit home.
Of those pictures I took that Christmas, there was one of Uncle Gene drinking a beer by the fireplace. Yup, there was one of Aunt Pat drinking a beer in the dining room. And, of course there was one of Grandma sitting daintily in a chair, a cold, clear glass filled with golden lager tilted to her lips.
Yeah, those were the days. What a good Christmas.
* * *
Weeks later, once the film was developed, and pictures delivered to our home, I also remember being lectured by Dad for the over-enthusiastic use of my new camera that Christmas.
* * *
Merry Christmas, every one!
Comments to DontRushDon@gmail.com

Some kids wanted BB guns, I wanted a camera added by Don Rush on December 23, 2020
View all posts by Don Rush →