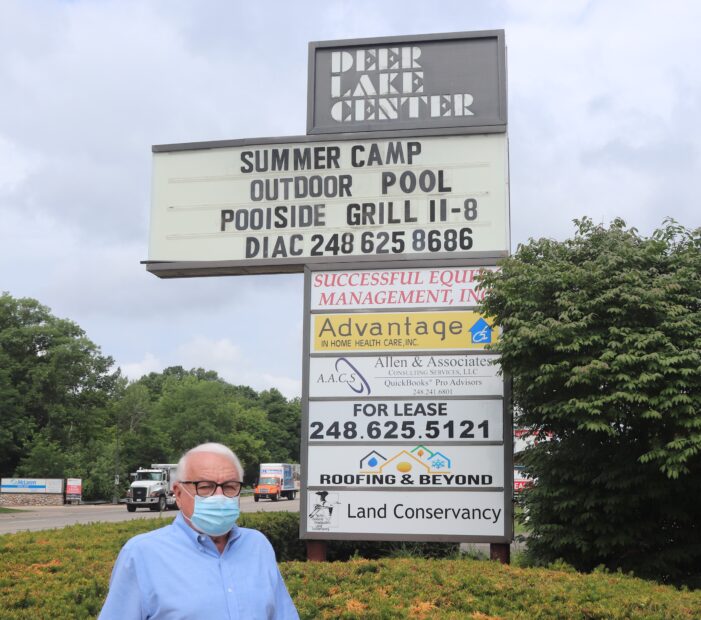 The second reading and public hearing of the adoption of the LED lighting sign ordinance was postponed at the July 21 meeting of the Independence Township Board of Trustees due to tweaks in enforcement and administration, stated Township Supervisor Patrick Kittle.
Community voices were still heard as Forrest Milzow, owner of the Deer Lake Athletic Club, was in the audience to speak to the board as a businessman in the community regarding the ordinance.
He cited his 50-year-old non-lighted sign located on Dixie Highway which is changed by an employee climbing on a ladder in all seasons to put up notices about the club.
“There is a lot of traffic on Dixie Highway and I want to be able to change my board daily,” Milzow said. “I don’t need to do it more than that.”
He explained how employees go out in all weather conditions make the changes, then letters fall down or the wind blows them down, saying it takes time and is not efficient.
“There are lighted signs at the southern border of the township in Waterford and again just north of me in Springfield Township,” Milzow said. “I don’t want to put pictures on my sign or change it multiple times a day, I want to be able to change my sign from the office and be done with it.”
Independence Township Planning Commission member Sam Moraco, who is seeking election as a township trustee in the Aug. 4 primary election and has been against portions of the new ordinance, spoke to the board as well.
“I can’t believe that no board member has any suggestion on how to achieve the goal of electronic manual text without going to the other end of the spectrum and go so far past what has been requested,” Moraco said. “In almost 20 years, I never remember anyone asking for TV monitors and pictures and multiple changes by the second. The people who have been asking for electronic signs are banks for CD rates, gas stations, restaurants for menu boards, and places like Pine Knob that have a different message daily.
“The solution to meet the actual needs of the business owners is to allow text on narrow strip of sign just like the manual message board signs, allowing it to change once a day, not every two minutes.
“You are confusing businesses that need to update things on a daily basis, not sacrificing the community to sell a loaf of bread.”
Township resident Steven Yingling spoke via Webex to the board, saying he is a gravel train truck driver and felt LED roadside signs that changed often are a distraction to drivers.
The ordinance is scheduled to come before the board on Tuesday, Aug. 25, for potential final approval from the trustees.