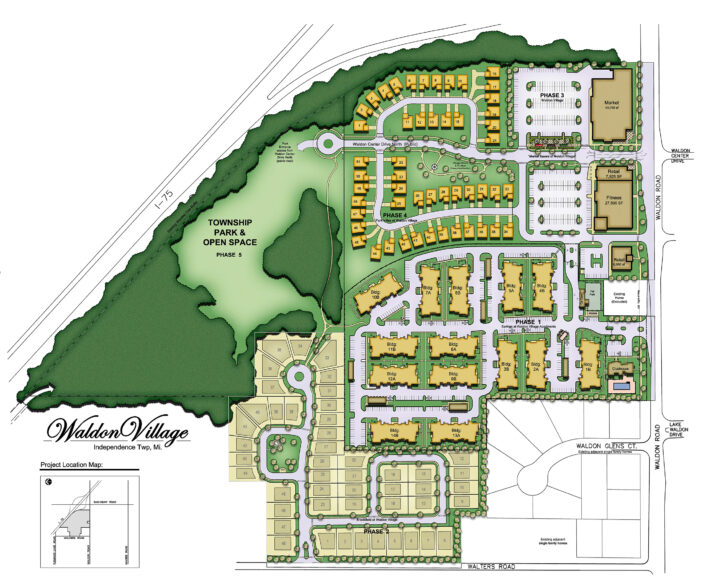 The Planned Unit Development project, Waldon Village, located on the north side of Waldon Road between Sashabaw and Walters roads, received final site approval from the Independence Township Planning Commission in a 5-2 vote on October 1.
The plan will be on the Independence Township Board of Trustees agenda in a month or two according to Brian Oppmann, township planning and zoning manager.
Oppmann said there are a few details that the commission and the developer agreed to change, and those changes will delay the plan coming to the township board immediately.
The plan originally came to the planning commission in February and has had several revisions.
A major revision was the amount of acreage in the commercial area, which was reduced by 75 percent from 35.5 acres to 9.27 acres. Less parking spaces and businesses will be located on the site. A gourmet style market and fitness complex are still planned for the commercial area.
In the commercial and retail area, approximately 12,000 square feet of space has been designated as a Market Square Plaza for public events such as an art fair, concert, or Taste of Clarkston.
The area was described by Jim Eppink, a developer for the project, as approximately a block long and half of a street area.
While the developers will be coming back to the planning commission for some possible changes in the retail and condo areas, Phase I, the Springs of Waldon Village, a 15-building, 280-apartment complex, and Phase 2, Brookfield at Waldon Villa, a 48-unit home development, are ready to be developed if approved by the Independence Township Board of Trustees.
Brookfield at Waldon Villa will be located on Walters Road, on lots of 115 by 55 feet and sell in the upper $300,000 to mid $400,000 range. The roads in the area have changed to allow no cut throughs to the retail space due to high school traffic. Landscape buffers are planned.
Walkability for all three residential areas – Brookfield homes subdivision, Springs of Waldon Village apartments, and a condo community, Park Villa – will be available to the retail and a new township park planned in the north end of the development.
Developers have deeded Independence Township 17 acres at the north end of the development to create a park for the community.
The Park Villas will be designed for empty nesters according to Buzz Silverman, developer of the PUD.
“The research we have seen says that there is a need for empty-nester condos in the Clarkston area,” said Silverman.
A total of 51 Park Villa condos are planned behind the commercial property on the northeast side of the parcel next to the park.
Waldon Center Drive will be extended north through the complex to access the park. There will be a light at Waldon Center Drive and Waldon Road as the development progresses.
Additionally, Waldon Road will have a right-hand turn lane from Sashabaw Road to Walters Road.
Independence Township Trustee Ron Ritchie, who also sits on the Independence Township Planning Commission, said, “I see progress in the plan while trying to meet concerns of the public. The plan is much smoother, much more well thought out.”
Ritchie said he liked the extension of Waldon Center Road back to the park.
“From the sea of parking and no connectivity, generally, the development has come a long way to overall appropriate land uses,” said Planning Commission member Tom Loughrin.
Planning Commissioner Sam Moraco said he’s not against the development, but has certain reservations.
“I think the development lacks quality in design, no definitive break in the housing, and the developer is jamming as many people into the development as he can, (but) that is what developers do,” Moraco said. “Fifty-five foot lots for houses are substandard. I think it needs to go through a couple more revisions.”
Richard Carlisle, planner for Independence Township, reminded the board and the public of the history of the 67-acre property. In the 1980s, the property was designated industrial, then changed to research and office use. At one point, a big box store was looking at the property and the planning was changed to the current designations.
Carlisle told the planning commissioners and the public that he felt the development of the property as a unit was a plus for the township versus fragmented land uses. He also explained that the PUD has to have a benefit for the public, and the park and the civic plaza provide just that.