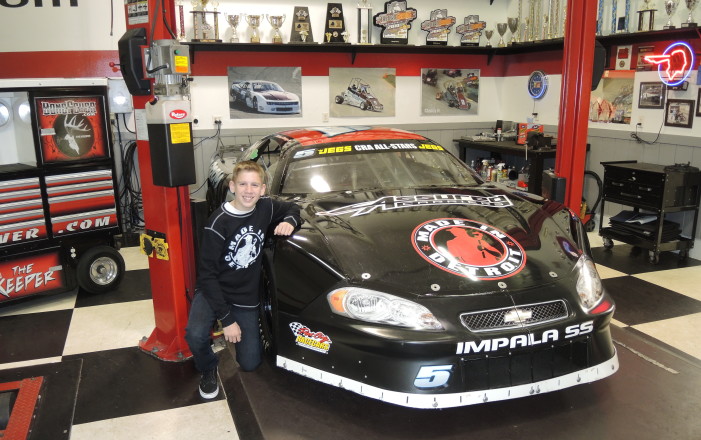 BY PHIL CUSTODIO
Clarkston News Editor
Michael Clancy Jr.’s racing career continues to take off. The 13-year-old is winning trophies at races around the country and recently signed a national contract with Made in Detroit.
“I’ll wear Made in Detroit products and they’ll help support the team (with race cars, transport truck, and crew),” said Michael Jr.
“NASCAR is southern, and with us from Michigan, we wanted a tie in with our state,” said his dad Michael Clancy, Sr. “It’s a big honor.”
The racer, who started out at the track at Oakland County Sportsmen’s Club in Independence Township and won his first trophies at age 5, is also driving a bigger car, a 450-horsepower Pro Late Model going 140 mph.
“They’re flying,” Michael Sr. said.
The new season of racing in JEGS and other races around the country starts in February.
“I practice a lot at the local track in Owosso to get used to the different size, tires, speed of the car,” said Michael Jr. “It feels weird, racing against people two times older than me.”
“He’s going to be awesome, in the top three for his age in the nation,” his father said.
Goals include signing with other national sponsors and racing at the NASCAR level in the next couple years.

One Response to "Young racer hits the big leagues"