Clarkston restaurants back open, with safety the top priority 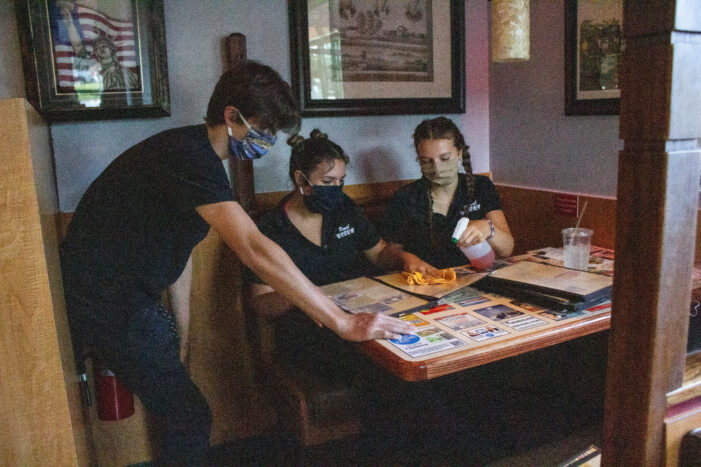 Back in March when the “Stay Home, Stay Safe” order was put in place, most Michigan restaurants were forced to close their doors.
After a long couple of months, hometown favorites and many more have begun opening up their doors to customers yet again with some adjustments mandated by the government.
Some restaurants, however, like Leo’s Coney Island, the Royal Diner, and Mr. B’s Roadhouse stayed open during the quarantine in order for their customers to still order to-go. Overall, similar extra precautions were taken to ensure the safety of the staff and customers during that time period. Some of these precautions include cutting down staff to limit the amount of people rotating through the building per week, designating people to a single job, constant sanitization, and very little staff-to-customer interaction.
Now that restaurants are able to open at half-capacity with mandated mask and glove use with daily temperature checks, each restaurant has their own plan moving forward to try to slow the spread of the virus.
Akram Mozep is the general manager of Leo’s Coney Island, located at 6325 Sashabaw Road, and shared some of the extra precautions being taken at the establishment.
From the beginning, there was a change at the register area that way the workers were able to stand six feet apart. More recently, there have been glass divider shields installed that wraps around the counter and creates a barrier between the employee and the customer during checkout. Signs have been placed on floors telling customers which way to walk to limit congested areas and certain tables have been labeled for “OK to sit” and “Do not sit.” On tables labeled “OK” for seating, a digital QR code scanner has been added to each table in order to offer contactless menus to customers.
Mozep added that although everyone may have their own beliefs and feelings toward the virus, the safety of his staff and customers is his top priority.
At the Royal Diner, 6540 Dixie Highway, Elizabeth Foglesong, restaurant manager, shared that most steps being taken are very similar, but not all the same.
Prior to coming into the building, customers are asked that they have a mask on, and if they don’t have one, there are some provided inside. Once a customer enters the building, they are asked to take their temperature before being seated. Only after being seated are customers allowed to remove their mask. All booths are separated by tempered glass to ensure proper distancing measures of each customer.
There is still a single person designated for carry-out orders and four wait staff on site. Extra sanitization is also a constant practice, and a new air filtration system called ‘I-Wave’ has been installed through the building’s air conditioning vents to kill bacteria in the air.

“Carry-out has been crazy, like so successful,” Foglesong said. “There has been so much love and support we’ve been given and we’re super grateful.”
Mr. B’s Roadhouse (6761 Dixie Highway) owner Ron Nicol explained that his restaurant is following the same rules mandated by the government. Nicol also said having a restaurant open during the pandemic has been complicated, but he believes the sales for Mr. B’s will be higher in July 2020 than they were in July 2019.
“Our patio is full seven days a week, open to close usually,” Nicol said. “Where we have seen a drop-off in in-person dining because of the limit on full capacity seating, we have seen it even out by the amount of carry-out orders we get.”
With a 25-year customer base, Nicol also commented on the immense support his staff has faced from the community, between just supporting the business by carrying out to being extra generous toward the staff during this time.
The Woodshop (18 S. Main Street), The Union (54 S. Main Street), Honcho (3 Church Street) and Bunkhouse Burger (5890 S. Main Street) are all in the same chain of ownership and took very similar steps in their reopening process.
Sarah Babbie, a front of house manager for Honcho, shared the restaurant chain was closed for a few weeks when the shutdown first hit.
When they first began their reopening stages, they started with only doing carry-out and have now moved into seating half-capacity.
In order to get the most people in and out of the restaurant, customers are asked to have a reservation set in advance. To make sure all customers are being served in a timely manner, and reservations are being followed, customers are allowed up to 90-minute stay times.
Babbie shared their menu has been digitalized and is offered through a QR code scanner located on each table. For those who need a hard copy, there are single-use paper copies available as well.
At Gregg’s Gourmet Cafe, located at 5914 S. Main Street, owner Jeff Ryeson shared some of the steps his store has taken as well. Three weeks after closing on March 13, Ryeson and his staff began doing curbside pick-up orders.
After a while, customers were allowed to come in to pay if they wanted, but it wasn’t mandated. After each customer exited the building, all booth handles were sanitized and floors mopped.
Ryeson added his staff stayed compliant to whatever the governor had in place. The biggest adjustment was for catering orders.
“We try to do small amounts of orders in small containers,” said Ryeson. “So if someone orders breadsticks and dip, instead of having it as a free-for-all, we put them into more individualized containers.”
As of now, restaurants are staying open with safety precautions set in place.
If you have more questions or concerns, call the restaurant in question before visiting.