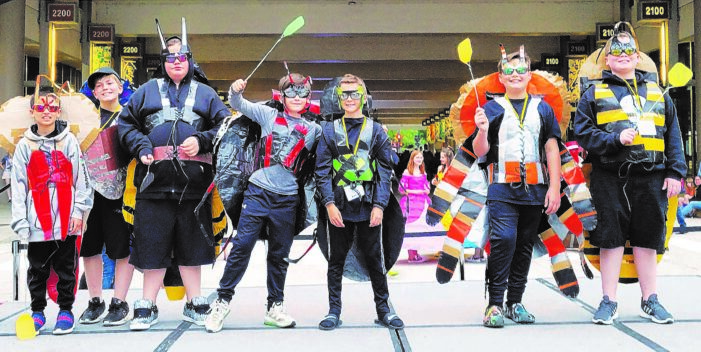 By Michael Dargay
Special to the Clarkston News

Late last month, the International Global Finals Destination Imagination Tournament was held in Kansas City, Mo., and the North Sashabaw Busy Bees team was there to participate in the incredible experience.
The team presented its Central Challenge technical challenge solution to a group of international appraisers and displayed their teamwork skills during the Instant Challenge portion of the tournament.
Destination Imagination is a performance-based, creative problem solving competition, with specific Central challenges focused around engineering, scientific experimentation, technical design, community outreach, fine-arts performance, and improvisation.
The NSE team qualified to attend the Global Finals tournament by placing first in both their Central and Instant challenges at the state tournament held in April in Lansing.
While each category has its own intricacies that make it difficult to complete, the technical challenge is perhaps the most varied of all. This year, teams competing in the technical challenge had to design and build two devices that were able to overcome hazards placed in the challenge.
They also had to create and present a story about a daring escape that incorporated their devices, while also including a creative feat of skill that directly contributed to the escape. Adults weren’t allowed to contribute or help in any way.
All of the research, set building, costume creation, playwriting, and technological device building was completed by the team members.
In addition to having placed first in their Central technical challenge during the state tournament, the Busy Bees also placed first in the secondary part of Destination Imagination: the Instant challenge.
The overall experience was one the team will never forget with the memories lasting a lifetime.