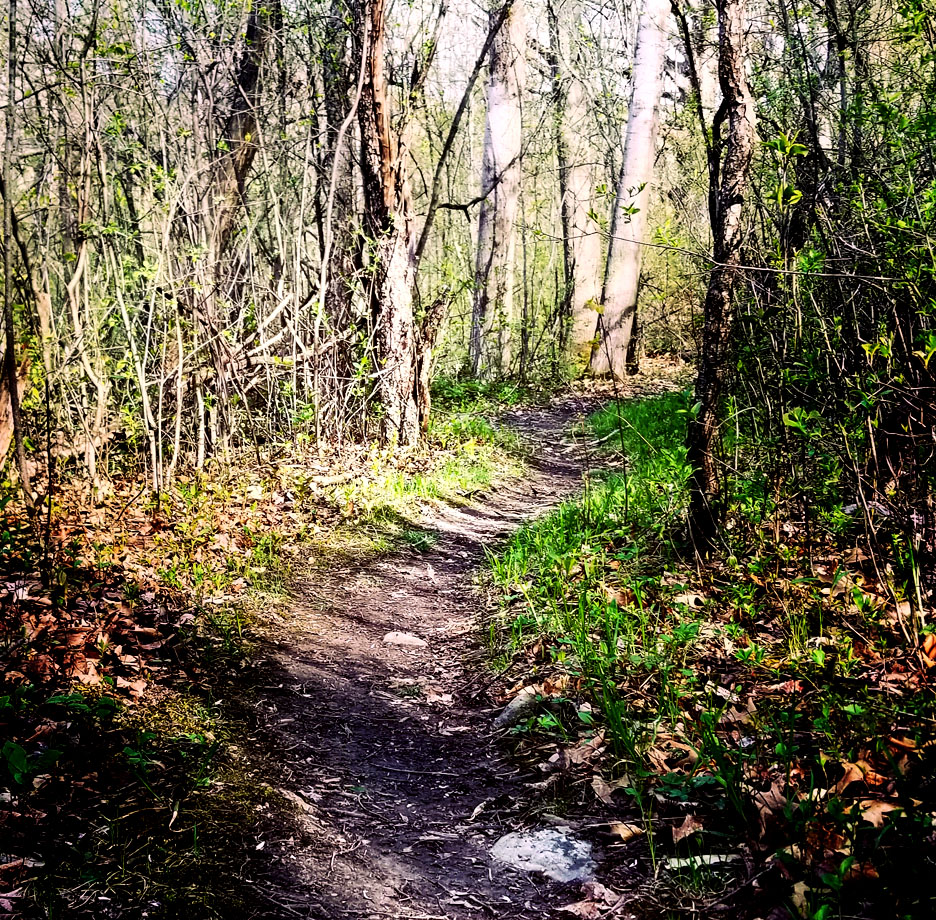 This path led me to my adventures in morel hunting 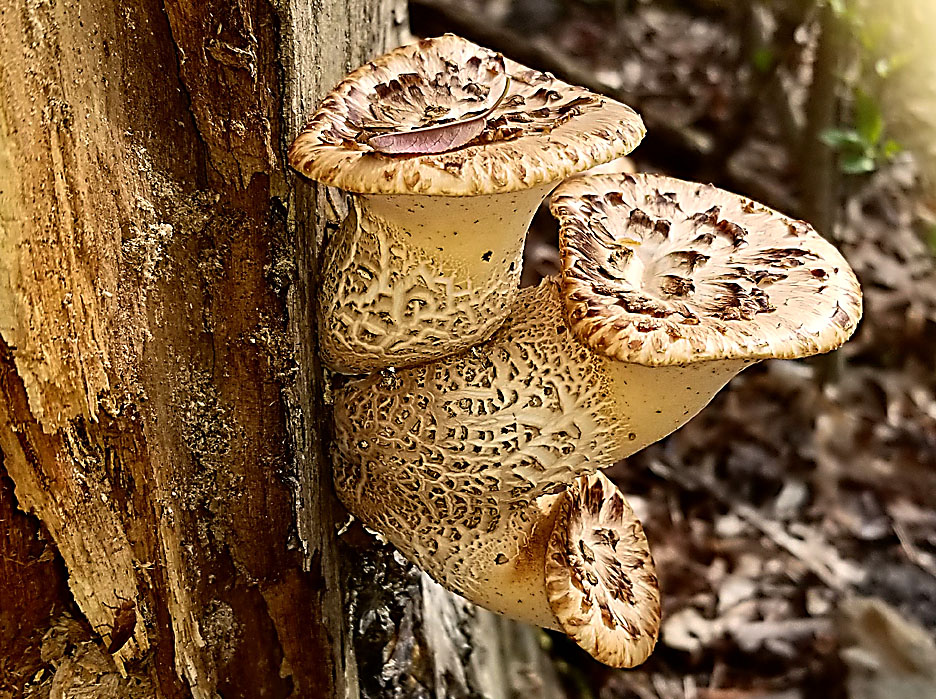 The first fungus I found was this. Any ideas what it is? 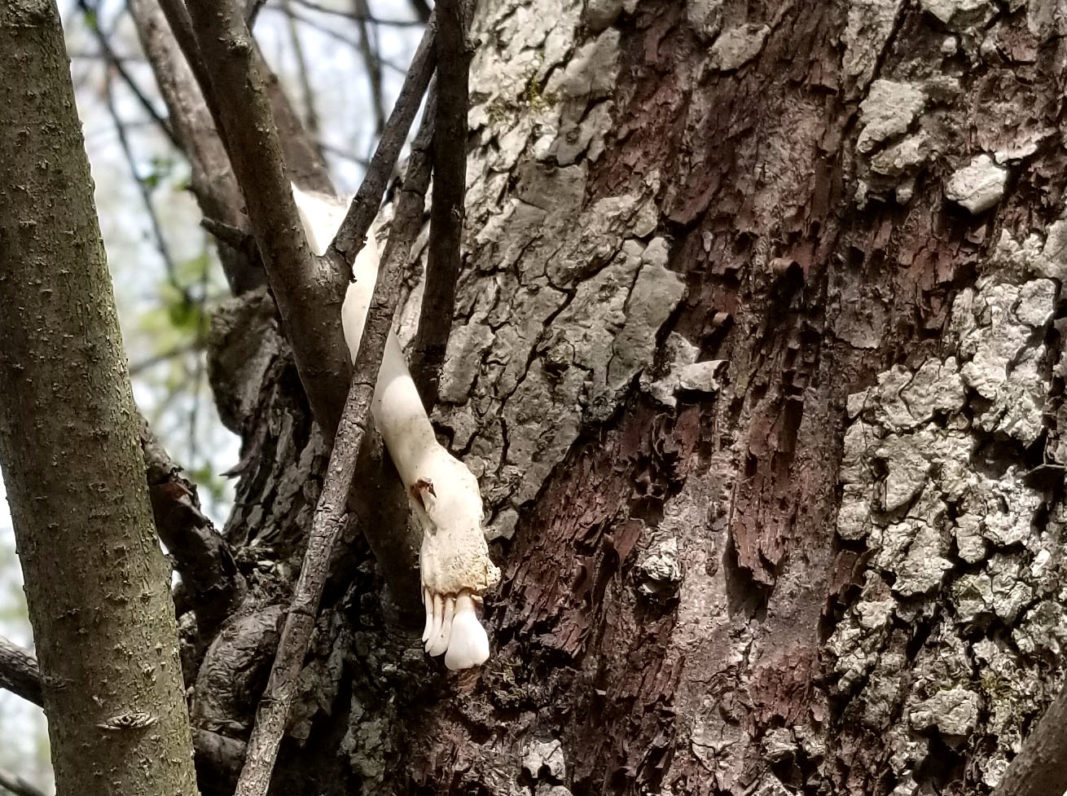 Before long I started to find bones in the trees. Anybody ever seen The Blair Witch Project? 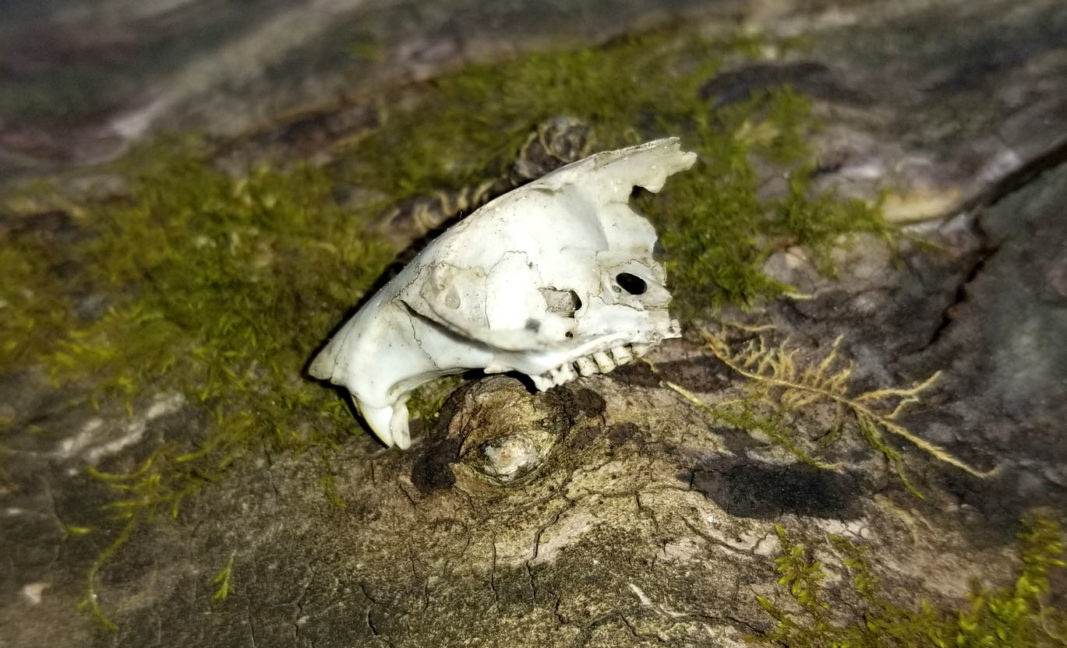 And, the little skull I found. 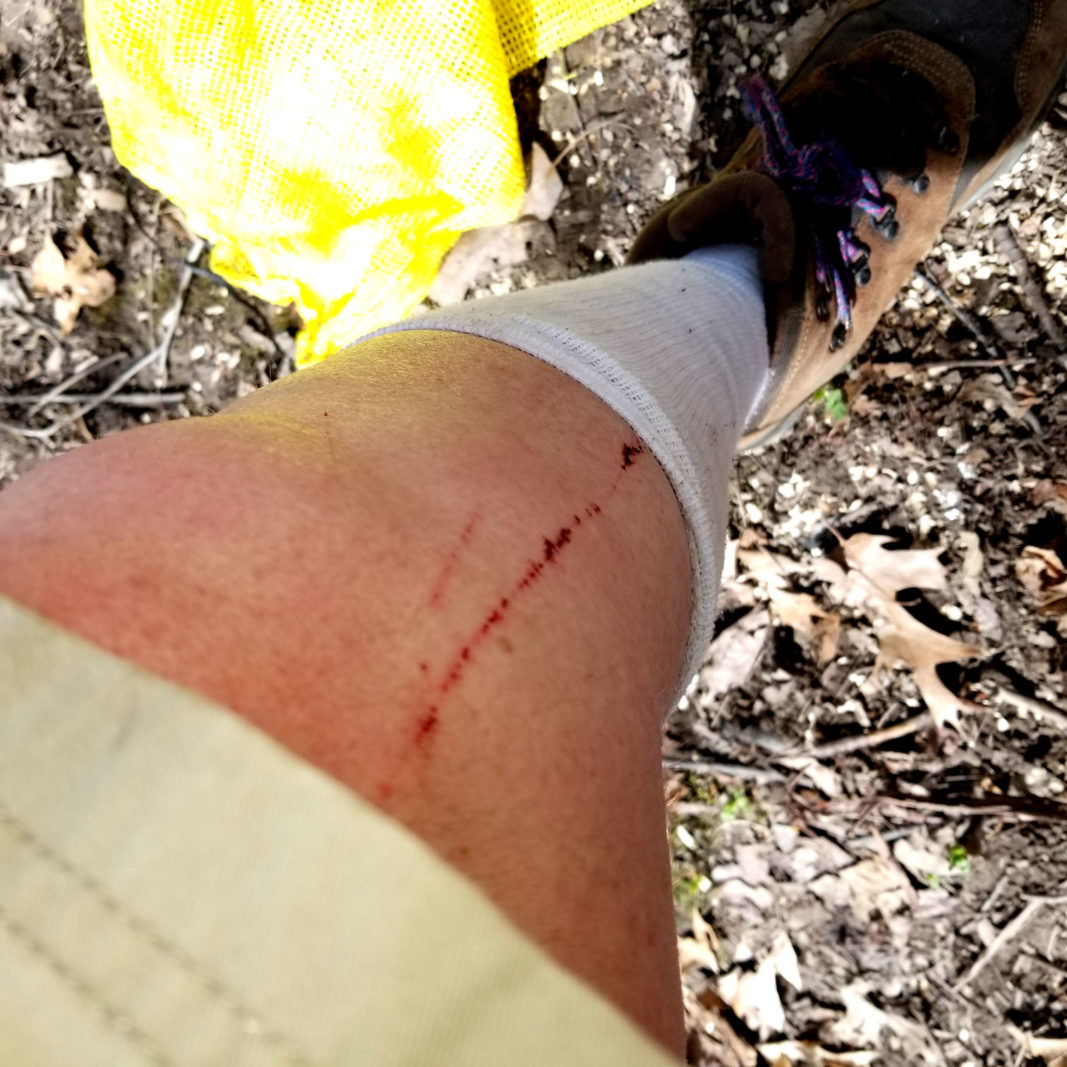 Yeah, note to self -- Pro tip, wearing shorts and walking through the bush results in bloodied legs. 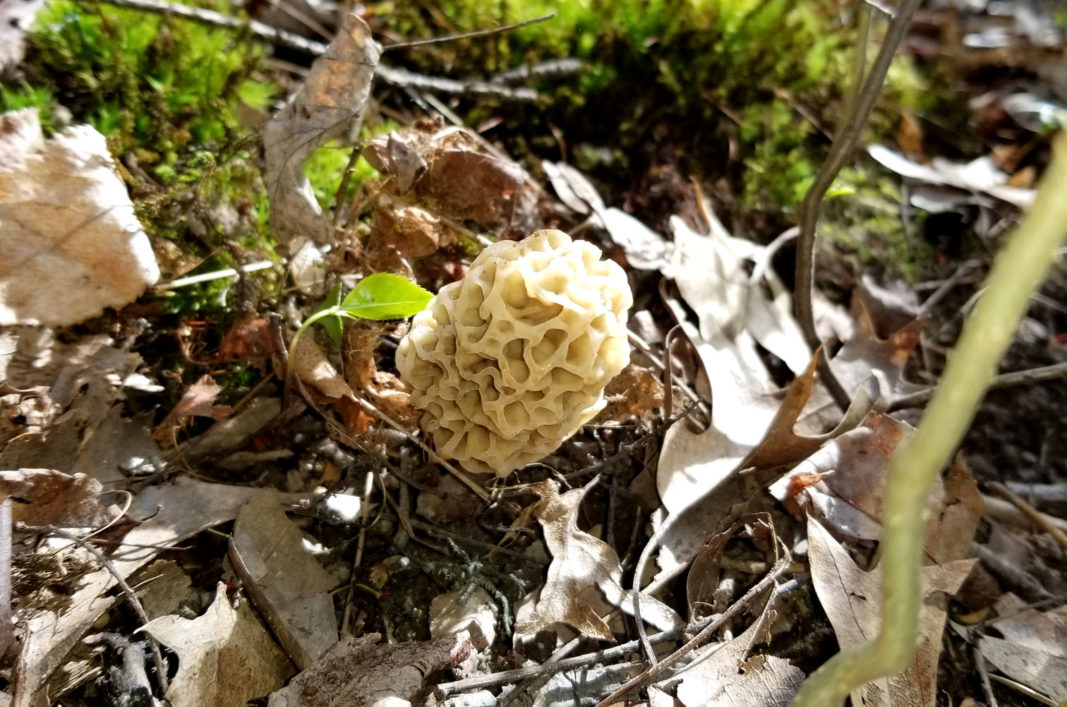 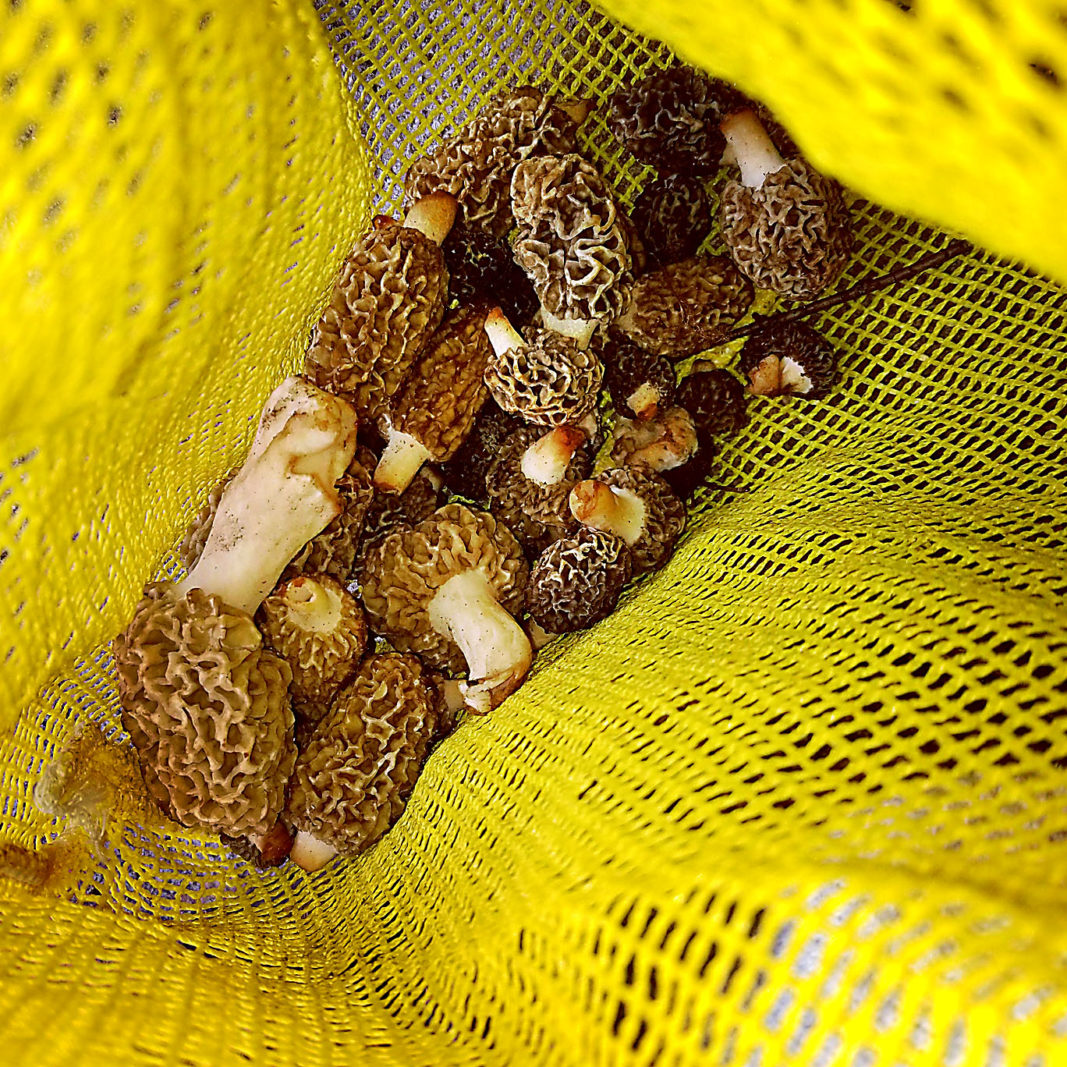 My yellow onion sack with a passel load of morels.

As your friendly, neighborhood geeky, nerdy guy, I tend to view life as an ongoing adventure story with new chapters added all the time. Trials and tribulations, romance and intrigue, the comedies and dramas all make up the book of a life. Is it any wonder then my life took a sideways turn last Wednesday, May 9?

. . . there I was late that Tuesday night, bellied up to the bar, sipping on a sarsaparilla, minding my own business at a little hole-in-the wall joint in a little nowhere town, just a bit north of here.

Johnny Cash was singing something about “the mud, the blood and the beer” when the door to a darkened street opened and three rough looking hombres entered. They eyed me suspiciously as they walked by, stopped and looked around to see the only three seats left in the place were directly to my left. I jumped a little when I heard the loud sizzle of raw meat as it hit the griddle behind the bar.
Not a rough and tumble man myself and in my egg-headed ways, I shrank a little into myself in an attempt to make myself look small and unnoticeable as the three sat next to me. One. Two. Three. The blonde behind the bar who had been attending to the burger turned and addressed the trio, “The usual, boys?”
Grunts of affirmation confirmed the blonde’s question.
As their drinks were delivered, I tried not to listen to what they three were talking about in hushed tones — but I am a reporter type and the one thing I do well is listen. Though it was kinda’ hard to hear them over the jukebox music (Johnny Paycheck replaced Cash and was yodeling on about taking “this job and shove it.”), but I heard the word “morel” and curiosity piqued, I leaned a little to the left and listened more intently.
“Okay,” the one in the middle said. “Tomorrow we take off work. I think the morels are up. We’ll make a killing.”
I couldn’t help myself and blurted out, “Morels? I have never hunted morels, I have always wanted to find morels. Where? How do you hunt morels?”
Three faces — all with facial hair — turned to look at me, and in unison gave me the stink eye and “Shh.”
“But –” I started to interject only to be cut off before I could finish.
“Quiet, you idgit,” the mustached face in the middle told me under his breath. “Do you want the whole danged town to know where to find our stash?”
There was an awkward moment when nothing was said and all six of their unblinking eyes just glared at me. Even though I am socially inept, I caught their jist. These guys had a secret and they didn’t want to share — which is weird, because soon they allowed me into their cadre. A booth opened up in the back corner and with a jerk of his head, Mustache (they called him Magnum, probably because his mustache was big and dark and over his dark wavy hair he wore a Detroit Tigers baseball cap) motioned us all to fill those vacated seats.
“Okay,” he said. “We need a fourth. What’s your name?”
I told him “Idgit” would suffice.
“This here is Guitar Red,” he motioned to a red-haired dude with a Grizzly Adams-sized red beard to his side. “And, that guy standing next to you, that there is The Rabbi. Rabbi, sit down.”
The Rabbi was a big, burly dude with a long black beard, who somehow managed to drink his drink and chew tobacco at the same time. If being Jewish had a look, he didn’t look it, so I don’t know why they called him The Rabbi. He plunked his bulk into the seat next to me, effectively pinning me in — no way to escape.
Magnum looked at me and said, “Meet us in the parking lot at 9 tomorrow morning. Bring some bug spray and an onion sack. Now get.”
I looked over to The Rabbi and meekly mumbled, “Excuse me, uhmm, Rabbi.”

The next morning, Wednesday, May 9, was a glorious morning. Sunny and warm. I wore knee-high white socks, hiking boots, cargo shorts, a green tee shirt covered by a short sleeved, khaki safari shirt. I looked the dandy and was ready for The Great Morel Quest of 2018! I got to the parking lot early and waited for them. Soon, a long, dark GMC urban assault vehicle with as equally dark tinted windows pulled up next to me. A door opened and I heard, “Get in.”
When I did, the door was shut and a burlap sack was put over my head. “Sorry,” Guitar Red, the driver said. “No body knows where we’re going.” About 10 nervous-to-me minutes past before the truck was parked. “Get out,” I heard Magnum. “We’re gonna’ walk you into the woods a bit and then we’ll take off the hood.”
We did and the hood came off. “Okay, get lookin’.”

And, look we did. Deeper and deeper into the forest, on and off paths. For an hour, then another. I looked under old apple trees, fallen and rotting oaks. Nothing. The only thing I did find was the thumb-sized skull of some small ground squirrel. I looked up and didn’t see Magnum, Guitar Red nor The Rabbi. I listened and couldn’t hear them.
Had they left me here in the middle of . . . of, where?

It was too late, I was too deep into it, so I made up my mind to find some morel mushrooms. I dusted off my trepidation and headed further into the bush. By the third hour, with stinging and bleeding legs scratched by raspberry thorns the woods opened up a little and there on the ground was the object of my desire. A morel. And then another and another!

I filled my yellow onion sack and called out, “Hey guys. I found some!”

Soon the trio, dressed in dirty jeans and tee-shirts appeared in the wood to my right. “Good.” And, then the sack was put over my head. We walked out and I was driven to my own car. The Rabbi looked sternly at me and before they drove off said, “If you tell anybody about our spot, we’ll have to kill you.” Then he laughed. “Heh, heh, heh.”
* * *