Don’s ‘special’ powers and in the 3rd person ta-boot 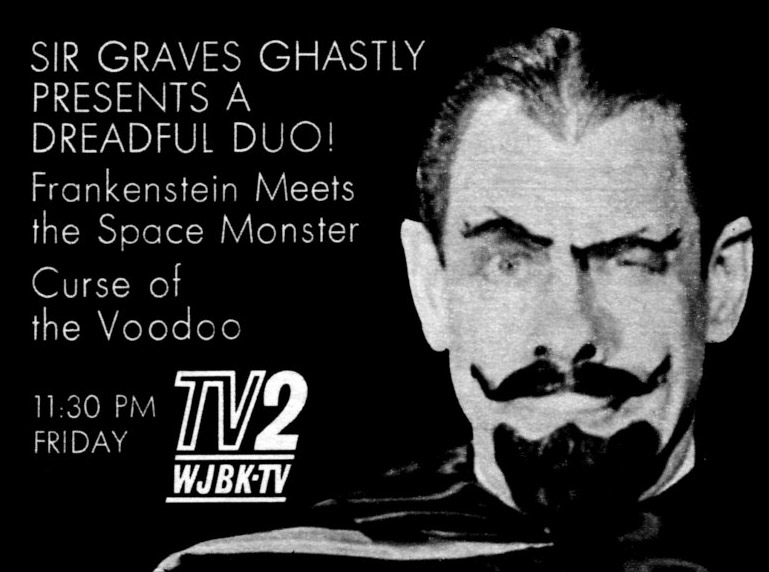 Lawson Demming -- aka Sir Graves Ghastly was a staple on Saturday mornings at the old Rush homestead. 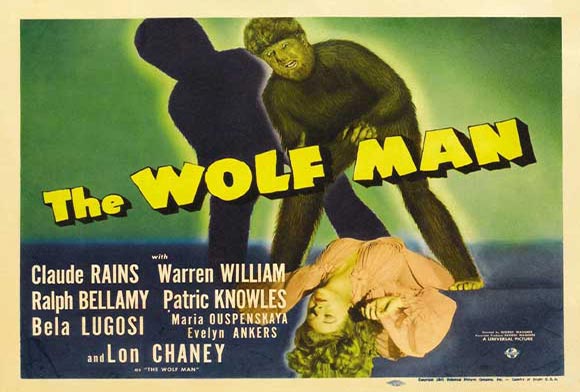 Flat-footed here for the 1941 movie poster, but trust me, the Wolf Man ran on his toes in the movies!

Don Rush would like to take a moment, right here and now to apologize to all the kids whose Halloween he wrecked. It was a mere two weeks ago Don was in a conversation with someone about the unseasonably warm weather they experienced this October.

Rush quipped something like, “The kids will have it easy this Halloween. Stupid global warming is making life too easy. Harrumph. Why, when Don Rush was a whipper-snapper it wasn’t Halloween if it wasn’t spitting snow!”
They ended their conversation agreeing this year it would not get cold enough for it to snow . . . and then on Monday, October 30, he saw snow flakes. Sorry kids, Don Rush jinxed it.
(Yup, his powers are so awesome he can affect the weather.)

When Don harkens back to those joy-filled days of his youth, his recollections of Halloween are sketchy at best. Rush admits, he finds this kind of disheartening because he likes to think his memory is razor sharp. And, while Don Rush is still holding to his belief of a good memory, he is putting an asterisk next to it.

*Memory good, with the exception of recalling Halloween.

He’s not sure why, either. He likes Halloween. Rush may not be a card-toting member of the local Club O’Wicca, but, with Celtic-blood pumping through his heart and veins, it’s natural for him to find a connection with this Christian/pagan holiday. Don just doesn’t remember much about Halloween’s past.
Maybe he’d remember it better if there were Halloween carols just like at Christmastime?
Don Rush is surprised Halloween experiences have not stuck with him. The practice of going door to door, simply repeating the mantra, “Trick or treat,” while holding open a sack for folks to dole out the sweets, resonates well with me. Of Irish/Scot lineage, he liked/likes the idea of getting stuff other folks paid for, for nothing. El-free-bees are great!
In a word, that makes him CHEAP.

Don would have thought he could remember all the costumes and everything else about the spookiest time of the year. Heck, he likes monster movies and scary books. Always has. Recently, while watching the 1941 classic werewolf movie, the Wolf Man, starring Lon Chaney, Jr., as the tormented Lawrence Talbot, Rush remembered something from when he first watched the movie on the Sir Graves Ghastly show. It was a Saturday afternoon in the early 1970s. The television was on Channel 2, airing was the horror-movie host (my local TV hero), Sir Graves.
When he saw the bipedal Wolf Man run, Don turned to his dad, (Don, too) and asked, “Pops Rush, why does the Wolf Man run on his toes?”
The old man, ever the old movie buff, shook his head. “I don’t know, son. It could be a side effect of lycanthropy, but I am not sure — ask Sir Graves.”
The younger, naiver Don Rush set pen to paper and posed said question to Sir Graves. It was the first of many letters and drawings sent by Young Master Rush from their little Clarkston house on the hill to Sir Graves’ Southfield address. Sadly, he never got the answer from the TV host. (Though he has written of this experience before and some readers actually did answer him. Don Rush is sorry; he forgot what you said — which is another chink in the fast tarnishing armor of his grand memory.)
He can remember Sir Graves, the letters and the movies, but as for the harrowing Halloween exploits of one Donald P. Rush Halloween, it’s all foggy. As a matter of fact, about the only thing he can remember about Halloween (other than he actually participated as a kid) is the weather.
Most of the times he thinks it was cold, rained or snowed. Or maybe Don Rush is really just Donny Downer and only remembers the bummer times. Go figure.

Well, what the heck just happened? Good people, that was an exercise in third-person writing. (Kids, don’t try this at home.) I think it went “swell,” don’t you? Why did I go into some bizarre-o writing world? First off, because I can. Secondly, someone communicated with me, stating yours truly uses the word “I” which isn’t proper English. He said his “junior high and high school English teachers” told him he could not use the word “I” in English papers.
I tried to explain the difference between English and newspaper column writing. Don’t think he got it, so — this column was an example of why using the word “I” is not only acceptable, but preferable in the hallowed halls of Don’t Rush Me-dom.
All in favor, say “I.” All opposed, don’t read.
The “I’s” have it.

Just in: It snowed Halloween morning.

Comments for Don Rush, can be e-mailed to: DontRushDon@gmail.com

Don’s ‘special’ powers and in the 3rd person ta-boot added by Don Rush on November 1, 2017
View all posts by Don Rush →