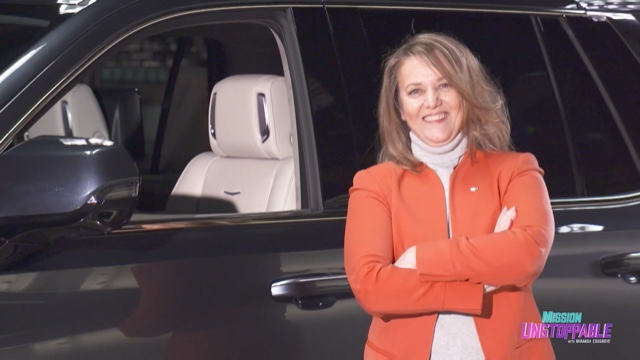 Clarkston local Joanne Leddy grew up in a family of engineers and car buffs.
After earning a Bachelor of Science in Mechanical Engineering from Michigan Tech University, she was instantly drawn to a career in automotive design. Now, some 30 years later, Leddy is an infotainment program manager at General Motors.
As part of an all-female design team, Leddy is responsible for the infotainment strategy across the Cadillac brand, including the popular Escalade model. During her time at GM, Leddy was a driving force in bringing the new OLED (organic light emitting diodes) display technology to the new Escalade line, eliminating windshield glare from the dashboard panel.
She wants to show that in a male-dominated job sector, women can have a role in the automotive field, too. Leddy noted that in her career at GM, she has seen more and more women participating in the automotive industry.
“While I was at college, I was typically the only one, two or maybe three women that were actually in the classroom taking these engineering courses,” said Leddy. “When I joined GM, many times I was the only woman engineer in the room, so at first, it was difficult, but times have changed. Women’s contributions and our successes are recognized more and more now. Our contributions to the STEM (science, technology, engineering, math) community are being more and more appreciated.”
Leddy and her work were recently featured on an episode of ”Mission Unstoppable,” a CBS series which spotlights cutting-edge female scientists and STEM professionals to inspire young girls to consider and pursue STEM careers.
In the segment, which was filmed at the GM Tech Center in Warren, Leddy explained how her job takes an idea to reality, from design concept to sketch, and then to a prototype model.
“The Cadillac PR team contacted me with this opportunity to highlight how women in the automotive space are contributing to the production of our vehicles,” said Leddy.
“I jumped at the opportunity and was flattered to be asked. Given this platform that gives us the opportunity to talk to young women that are considering careers in the STEM environment, I’m all in.”
Born in Grand Blanc and raised in Marshall, Leddy has lived in Clarkston for the past 23 years with her husband Dave, daughter Sabrina and son Brendan.
“I love the small size of the city and from growing up in Marshall, I like the smaller community,” Leddy said. “The schooling in Clarkston is excellent. Our two children graduated from Clarkston High School after transitioning from Cedar Crest Academy. We were happy with all they learned and took from their schooling here.
“There is so much community involvement in Clarkston, and it’s just the perfect size for me.”