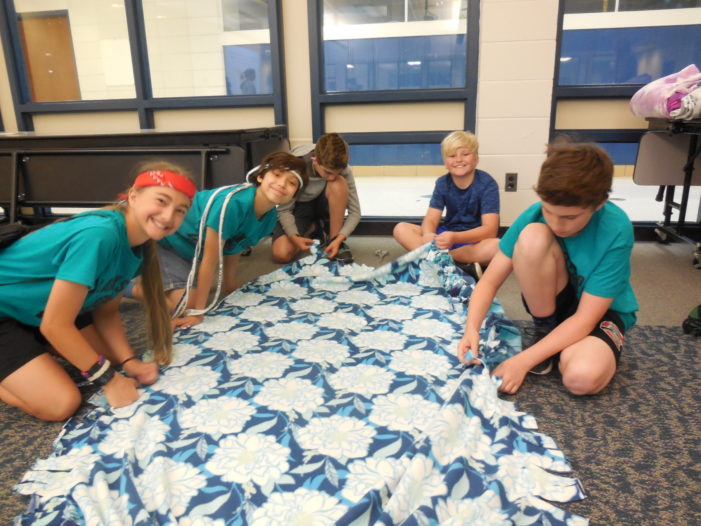 From left, Violet Bergman, Justin DeDarr, London Traver, Zach Juzysta and Derek Whacour were all smiles when working on their tie blanket. Photo by Serena Stauffer

BY SERENA STAUFFER
Clarkston News Intern Writer
Sixth graders at Sashabaw Middle School put their Wolf Day to good use on Wednesday, June 6, tying blankets for children and adults with cancer.
The project, known as Will-to-Ty, was launched in 2010 by Clarkston teachers Kelly Mertz, Jessica Sorensen, Gwen Stewart and Kerri Gualtieri after two Clarkston Community School staff members had a child diagnosed with cancer. Will Pennanen was diagnosed with leukemia and Ty Duffy was diagnosed with retinoblastoma.
The project has since grown in the years that followed, and the blankets made by the sixth graders this year will be going to several local pediatric cancer centers, as well as the Karmanos cancer center on Sashabaw.
Dana Pennanen, who is a seventh grade math teacher at SMS, stopped by to talk to the students about her most important job, being Will’s mom, and how grateful she is for the passion the students show for this project.
“I appreciate everything that you’re doing today, because these blankets bring a lot of warmth and joy for kids and adults,” she said. “Sometimes, they weren’t expecting to be in the hospital when they get one of our blankets, and sometimes they’ve been there for a really long time, and so when you’re tying these today you can think about how much that means to people.”
The student’s enthusiasm was evident from the moment they walked into the room the school has nicknamed “The FishBowl,” and they were eager to get their fabric and begin cutting and tying. Sixth grader Kate Battishill shared why she was most excited to be partaking in the project.
“I’m most excited to help people with cancer feel more comfortable in the hospital,” she said. “I know how much blankets help people to feel more at home, and because they’re away from their home a lot they’ll hopefully help make them feel more comfortable in their hospital beds.”
Ian Dembinski shared similar sentiments as he tied his unicorn-patterned fleece pieces together.
“We get to give these to kids and it’s really important for them and special to them,” he said.
In addition to the students tying the blankets, there were several parent volunteers lending a hand or pair of scissors when needed. This will be Erin Modrzynski second year helping out, and she loves what it teaches the sixth graders.
“I think it’s a good reminder to them that other kids are going through things as well, and sometimes bigger things than they’re dealing with, so it definitely teaches them compassion,” she said.
Jacquelyn Hasenfratz was another parent volunteer who only had positive things to say about the project and the effect it has on the students, including her sixth grade daughter.
“I love that they’re getting out and getting physical activity during the middle of the day because they don’t really get to do that anymore, and this to me is just way important,” she said. “Making sure that these kids understand that they’re reaching out and helping the community.”
One of the lead teachers who was asked to work the Will-to-Ty event on Wolf Day was Beth Patton, a STEAM teacher, and her passion for the event rivaled that of the students.
This is her third year leading the ASL (Academic Service Learning) project, and she reflected on the power behind having so many students working together to create such a large quantity of blankets.
“I hope our students leave with a feeling of knowing that they’ve helped someone,” she said. “They had a good time today, but I also hope they remember just being able to help someone out.”
The goal of the project was to “wrap patients in love,” and they will certainly be able to feel that love in each and every blanket the sixth graders tied together.