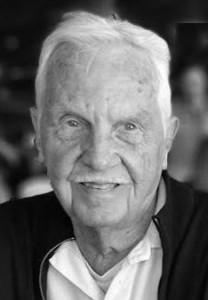 SHARKEY, Robert (Bob) Hugh; of Westminster, South Carolina; March 7, 2017; age 91. Bob Sharkey was born September 16, 1925 in St. Thomas, Ontario and grew up in St. Clair Shores, Michigan. He served in the US Navy Seabees (Construction Battalion) from 1943 (age 17) to 1946. He married Patricia Elliot in 1949; they raised seven sons and one daughter in Mount Clemens and then Lake Orion, Michigan. He graduated from Lawrence Institute of Technology with the help of the GI Bill. He worked for various companies as a chemical engineer. Patricia died at age 59 and Bob relocated to South Carolina. He married Doris Charlton, a friend from high school, who preceded him in death. All eight of Bob’s children survive him: Hugh, (Patricia Calazans), Paul (Mary), Thomas (Paulette), Jon (Amy), Barbara Cunningham (Rick), Patrick, Kevin (Anne), and Keith (Mary). He had 21 grandchildren and 21 great-grandchildren who treasured time with him, and he with them. He was preceded in death by his sisters Margaret Linsdeau and Mary Hortos. Bob Sharkey died on his terms, at home doing a crossword puzzle in the sun room he enjoyed immensely. He had just returned from a very rewarding cruise with most of his children. His children, grandchildren, and great-grandchildren will miss him forever. Visitation  Friday March 17th from 5:00 PM to 8:00 PM and Memorial Service Saturday, March 18th at  10:00 AM at the Lewis E. Wint & Son Funeral Home, Clarkston. Online guest book www.wintfuneralhome.com