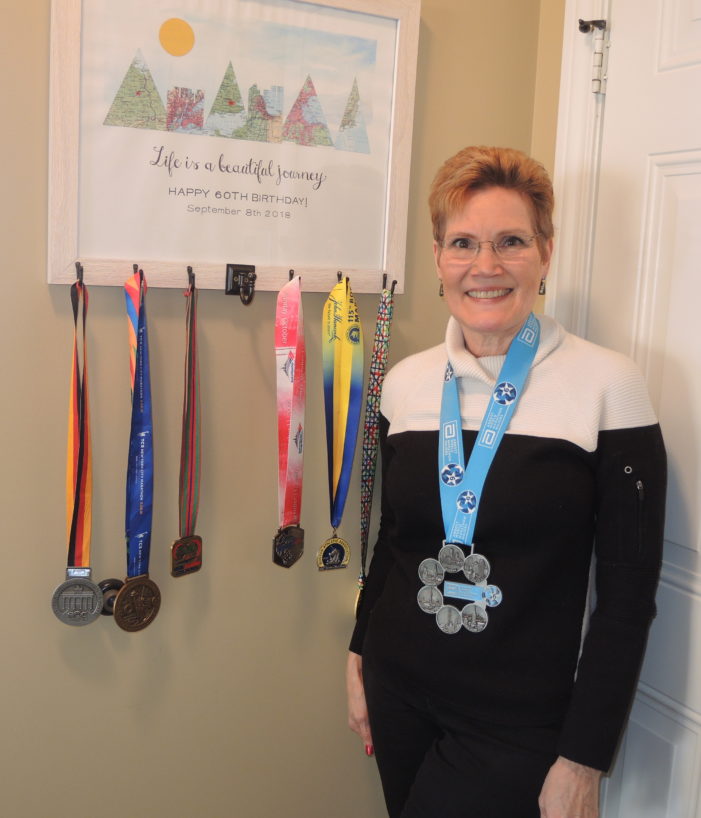 Jackie Joseph, with her AWMM and other medals she earned running marathons. Photo by Phil Custodio

BY PHIL CUSTODIO
Clarkston News Editor
Jackie Joseph of Independence Township has found when runners achieve their first marathon, they either mark it off their bucket list, never to run so far again, or they keep going.
Joseph is in the second camp, completing 62 marathons all over the world after her first one in Detroit in 2001.
“I love the sense of accomplishment. I couldn’t wait to go again,” said Jackie, a pharmacist who moved to the Clarkston area five years ago with her husband, Thomas Joseph, M.S., R.Ph.
She was 43 years old when she ran the 2001 Detroit Marathon.
“When I was younger, I wasn’t an athlete. I was a musician. I played the flute. And I was a big reader, an artsy person,” she said. “I would exercise to keep in shape but never played in team sports.”
She reconsidered sports when she was about 40, when her mother found she had osteoporosis.
“I looked at ways to keep my skeleton strong. Running was a good way to keep fit and strong,” Jackie said. “I had never run in my life. I bought a pair of tennis shoes and a book.”
They were living in Rochester, so she would run on the Paint Creek Trail with her yellow lab. It took three months before she could run a mile without stopping, and six months to run up to five.
“Once I started, I could go longer and longer. I found I really liked it,” she said.
She managed a running pace during the Detroit Marathon, finishing in 5 hours, 7 minutes.
“I just kept chugging along to the very end,” she said. “It’s a grind – 26 miles are not really fun.”
She kept training, running with neighborhood groups, signing up for other races, and hiring a Hansons coach to build up her speed. She finishes most of her marathons in about 4 hours, 30 minutes to 4 hours, 45 minutes, with her best at 3 hours, 58 minutes.
From her running magazines, she learned about trips organized for multiple marathons around the country and the world. She was skeptical at first.
“Four or five marathons in four states in four days? No way, I thought,” she said. “But I was intrigued. It wasn’t about speed or competition. It’s very relaxed, like a training run. I joined a wonderful group of people.”
In 2018, she earned her Seven Continental Club medal for a marathon on every continent, including Antarctica.
“It was pretty nuts, but incredibly beautiful,” said Jackie, who ran there twice, a half-marathon in 2014 and full marathon in 2018. “We slept in pup tents and had to wait for the weather. It was blowing like crazy, 30-40 mph winds, 10-15 below with the wind chill. It was brutal.”
The participants would run fully encased in Goretex, she remembered.
“My mittens were frozen blocks,” she said. “It was all up and down, rocky. It took about seven hours.”
She earned her highly coveted Abbott World Majors Marathon, AWMM, medal in 2018 after completing the Berlin Marathon, marking her completion of the six-marathon series – Berlin, London, Tokyo, Boston, Chicago, and New York.
“It’s really fun to run through communities and be supported by the local culture. It’s a very positive vibe,” she said.
In 2019, she finished her goal of running a marathon in each of the 50 states.
“The southwest region of the United States sticks out, like the Arches National Park. It reminded me of the outback in Australia. The Northwest is beautiful,” she said.
She and her husband have three sons and eight grandchildren, some who share her love of running.
“Two of my sons paced me at Myrtle last year. It was really special,” she said.
She has to cut back on some running this year, after finding she has osteoporosis herself. But she plans to keep going.
“Mount Everest, maybe next year,” Jackie said. “Cleveland, a couple national parks, Helsinki. Maybe four marathons this year. Why not?”