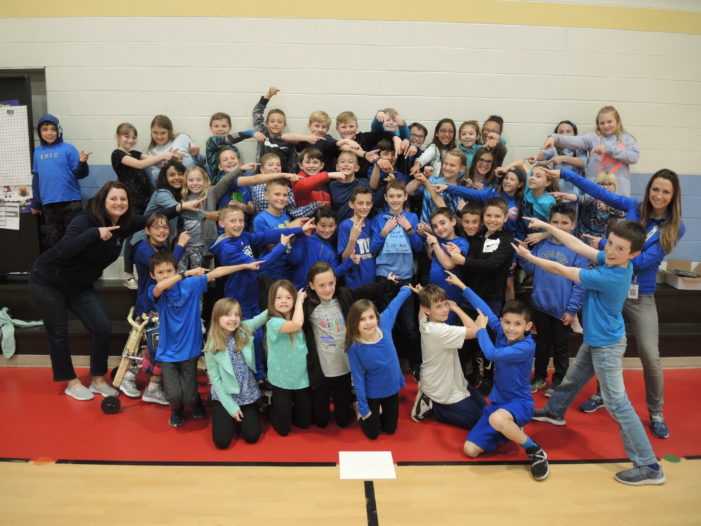 BY PHIL CUSTODIO
Clarkston News Editor
Boys and girls in blue filled Bailey Lake Elementary last Friday, all students showing support for their classmate, Weston Miller.
“I’m just kind of flattered. I’ve never seen so much blue in one place,” said Miller, whose video Living with Autism, Mt Life with Autism has more than 4,000 views on Youtube.
When his fourth-grade team teachers Bethany Rocho and Blagica Taseski saw the 13-minute video, which Miller made in March, they decided to share it with fourth grade students after asking for permission from Weston’s parents, Corinne and Daniel Miller.
“I watched the 13 minute video and was speechless. The video was informative, heartfelt, real, honest, and so very powerful,” Rocho said. “Students watched and you could see their hearts open up to Weston instantly. After the video concluded, I saw students high-fiving Weston, hugging him, and feeling comfortable asking questions and sharing comments in a sincere manner. Students were making connections with Weston, noticing more of their similarities than differences.”
Weston worked with his mother on the video and posted it on his Youtube channel “Mimi and Wolo.” He and his sister Brinley usually post challenges, experiments, pranks, and other fun topics on the channel, which has almost 900 subscribers.
“When they (classmates) first saw it, they had a lot of questions. I think they understand it better now,” he said. “I think I like our school. I’ve been here for a few years. I’ve come to know how the school works and what they do to get things done.”
His teachers decided to spread the video because of Weston’s powerful message, Rocho said.
“I decided to share it with my principal at Bailey Lake, Glenn Gualtieri. He had the same reaction, and in turn, shared it with the Bailey Lake staff at one of our weekly staff meetings,” she said. “As I watched Weston’s video for the 10th time, or somewhere around there, I couldn’t help but watch our staff get emotional and connect with this special fourth grader. Some were in tears, especially those who know Weston and can appreciate the growth he has made over the years.”
“It’s great to be in a position to offer a platform for this to happen,” Gualtieri said. “What’s most exciting is, it was his idea. It was all him.”
In the video, Weston addresses the camera to discuss his life on the Autism Spectrum, going into details such as when he was first diagnosed and how he has adapted his life today to better deal with it.
He also discusses how autism continues to affect his everyday life, and how others can recognize and adapt to somebody with autism, he said.
“Everyone is asking for a sequel to that one,” Weston said.
Word is spreading, with author Kathy Erskine posting it on social media, local business Body By Ahdi offering Weston a gift certificate to help with his swimming passion, which he discusses in his video, and Channel 4 News coming out for a television interview.
“I’m excited for that, I’ve never been on live TV before,” Weston said.
The fundraiser came from a discussion with the student, Rocho said.
The SCAMP Walk and Roll was coming up on May 5, and they thought it would be cool to have a day at BLE where staff and students could wear blue to represent Autism Awareness, and pay $1 donation to Walk and Roll.
“Weston wanted to call it ‘Light It Up Blue Day,’” she said. “We shared our idea with the principal and Glenn immediately supported the idea, eager to help make it happen.”
Weston made a shorter video for lower elementary students, while upper elementary students watched the longer video with their classes. They collected more than $300 for Walk and Roll, which he also attended, she said.