When the boys grow to young men 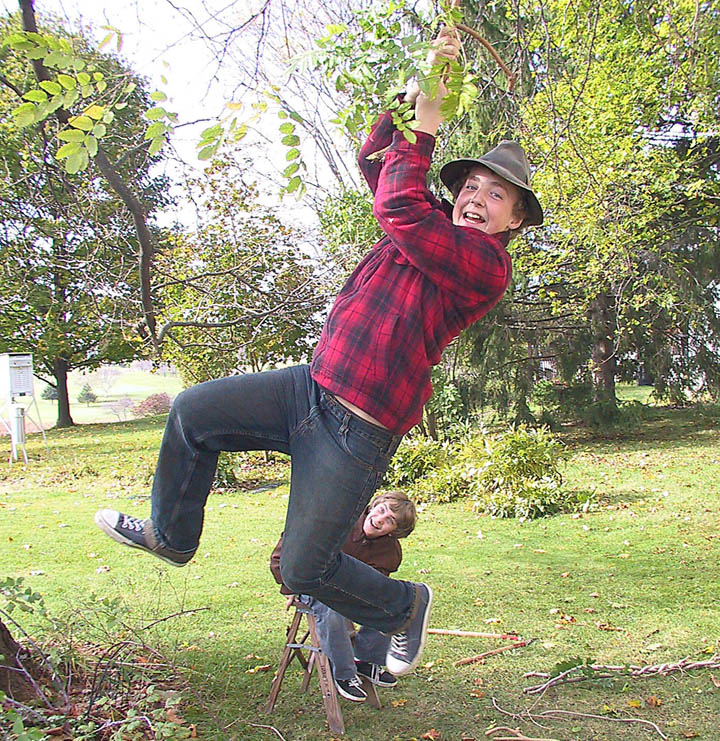 The Brothers Rush, Shamus swinging and Sean watching, from oh, 7 or 8 years ago

Interesting (at least to me) . . . saw both of my sons this past weekend. I picked up Shamus, 21, at his apartment and drove him to see his brother, Sean, who turned 19 on St. Patrick’s Day. They are both as tall or taller than yours truly. Both have facial hair and deep, manly voices. They’re fine young men and productive, taxpaying members of society.
So why is it then when I dream and the boys are in said dreams, like the other morning, the Rush brothers are perpetually mere lads of eight and six or of six and four?
Hmm?
Maybe it’s best not to ask questions or dive too deeply into my subconscious — I might get answers I don’t want. Maybe I should just be happy I can still remember those two when they were sweet and cuddly instead of them as they are now — big and stinky (and I say that with all the love and affection a father has for his sons).

Birthday gift buying for the boys these days isn’t nearly as fun as when they were not so adult-ish. Back in the day, it was fun to wander miles and miles of aisles in many different stores in search of gifts like plastic glow-in-the-dark Godzilla models, kites, books, electronic gadgetry, camping items, books, pellet guns and crafty things.
Nowadays, I buy ‘em gifts like a wrench, white socks, cleaning supplies for their vehicles; emergency items like jumper cables and cans of Fix-a-flat; and gift cards to grocery stores. Stuff they need, versus stuff that might tickle a 10-year-old’s fancy. Not as much gifting fun as before.

I have retained the right to embarrass them as much as I can, especially when their girlfriends are around. I try to achieve this worthy goal with their birthday cards. I like to get them cards designed for six-year-olds, ones with sparkles, words like, “to our little princess” and with accompanying pictures of unicorns, rainbows and teddy bears.
Makes me smile just thinking about it!

Don’t Rush Me: I am making mistakes as fast as I can (or, How I Wrecked My Kids) will be the title of my book on parenting. Sure to be a number one, best selling, smash hit!
At least they still like me (I think).

Last week I climbed up upon my newspaperman soap box and wrote a column headlined, “Democracy dies in the darkness.” That particular Don’t Rush Me column was about the loss of community newspapers across the country and what happens when local journalists leave a community. I also wrote what I believe the value to community a local newspaper has.
In response to that column, Samuel C., of Oxford, wrote . . .
Hi Don, I won’t rush you, lol.
Wonderfully written column. It is what finally pushed me over the edge and I have decided to (subscribe to) The Oxford Leader. That’s what you wanted right?
Also to build off that, I listened to a wonderful podcast NPR Hidden Brain “Starving the Watchdog” Dec. 10, 2018.
The podcast describes in great detail the importance of a local paper and its place as a watchdog of the community; it exposes government corruption and doesn’t let it go unnoticed. It gives a specific example how local decisions can have global impact.
The listener can’t help but feel bad for the press and journalists as a whole and the current situation they are in.
I have never in my life subscribed to a local paper but will do so now as I choose to support you and learn local news from my local paper.
My only hope is that more people have the same line of thinking as I do and decide to subscribe and interact by writing in and commenting and keeping the community spirit alive.

Thank you, Sam! Not only for the sentiments and the subscription, but also for the the heads up on the podcast, I will give it a listen!
Send comments to: DontRushDon@gmail.com

One Response to "When the boys grow to young men"