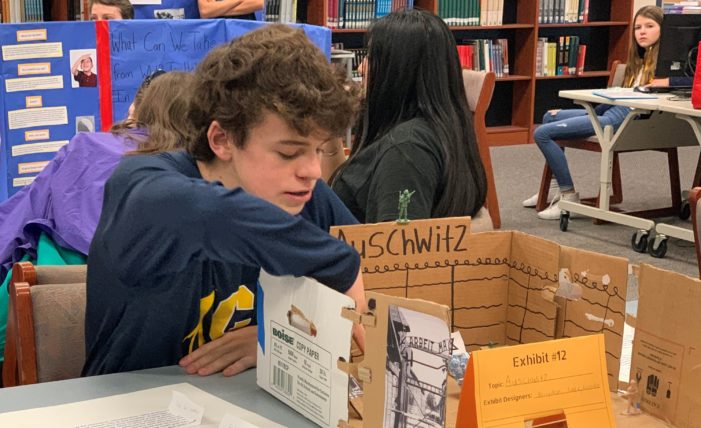 World War II raged 75 years ago; the challenge for 68 Clarkston Junior High students was how to make the historic event relevant today.
“The big takeaway we have with every project is to have a driving question with it,” said history teacher Mike Greve. “This one was, ‘why is it important to remember the lessons of World War II and what it taught the world?’ That’s what they should take out of this, something they remember and why it’s important.”
The projects, about what students learned about what led up to the war, and what happened during and after the conflict was used as part of the final exam grade for ninth grade ELA and History classes.
On Jan. 10, those students presented the exhibits to their classmates in the CJHS learning commons as part of a museum-type project where they acted as curators.
“There are three of us who work together (Greve, ELA teacher Jen Castiglione and ESL teacher Emily Grammatico) and the three of us, whenever we are planning out a project, we just kind of sit down together and come up with what we want to do,” said Greve. “Our idea is always to try and do something bigger than they’ve ever done before, something different than they’ve ever done before.”
Exhibits on display last week included presentations on the Auschwitz concentration camp and the Holocaust, Pearl Harbor, effects of the war, battles, and how the war has influenced present-day life.
“I learned the war really shaped everything and without all the events that happened in World War II, we don’t know where we would be today,” said freshman Chloe Marietta. “We might not be where we are now. I also learned how important it is to appreciate everybody who served and passed away trying to help our country.”

Greve said that by combining ELA and History classes, it helps with flexibility by allowing the students to work on projects for longer periods of time.
“We incorporate language arts skills into our history things and history skills into our language arts stuff,” he said. “Then we work it back and forth.”
The project had no particular guidelines, and students received the rubric last week, he said.
Ninth grader Cameron Fleming said he likes the World War II project because of the broad range of topics.
“We did our project on the Treblinka death camp,” explained Fleming. “There was about 700,000 people killed, mostly men. I like to build things, so I decided to build a model. It also gives you an openness of what you want to do and to explain yourself in different ways.”
Marietta said using a project like this for 40 percent of a final exam grade is unique.
“This is one of my favorite projects because it’s so hands-on,” she said. “I got to put a lot of my painting talent and crafting talent into this and it’s great that I was able to do that.”