Author turns to childhood for inspiration 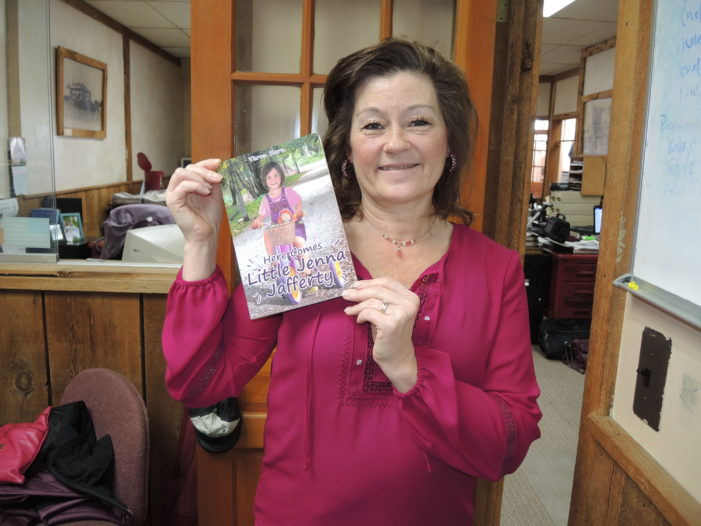 BY PHIL CUSTODIO
Clarkston News Editor
Terra Kern’s first book features a main character close to her heart.
“Jenna is me. Everything she goes through is an incident from my childhood,” said Kern of Clarkston.
Her book “Here Comes Little Jenna Jafferty” is about an adventuresome and curious young girl doing her best to be a good and helpful child, though her antics sometimes end with questionable results.
“Her adventures mirror my own childhood. I was quite the character, always getting into sticky situations, very stubborn and curious,” she said. “It was a lot of fun writing it.”
One chapter is about Jenna being impatient to go see “Mary Poppins” at the theater, so she puts the car into reverse and knocks over a fence.
“Did it happen? Oh yeah, it sure did,” Kern said. “Everything Jenna goes through is an incident from my childhood.”
Another is about a fishing trip where she gets into a carton of worms, drops one, “plop” into the water, then jumps in after it without knowing how to swim.
The book also features Jenna emptying a bear-shaped bottle of honey for use as a piggy bank, going to a carnival funhouse, fishing with her father and getting bitten by a pike, which she calls “alligator fish,” and looking at a painting of a sad puppy.
“She sits and stares at it and bawls her eyes out. She feels that puppy’s pain,” Kern said. “It ends with mom holding and rocking her. All of these really happened. We were quite the characters.”
She moved to Clarkston with her husband Bill Kern three years ago from the Lake Orion, Oxford area.
“I have an uncle who lives in Clarkston. It’s a beautiful area,” Terra said. “We found a house that fits all the specifications we were looking for and we jumped on it.”
She’s the middle child of three, with siblings Tammy and Tony, and is a graduate of Oxford High School. Jenna’s siblings Janine and Jason also share the same first letter.
“It’s a thing my grandmother started, with her children Dolly (Terra’s mother) and David,” Terra said.
It’s a tradition Terra and Bill continued with their children Brooke, Bethany, and Brandon. They have seven grandchildren, but their names start with different letters.
“My daughters dropped the ball,” Terra said.
This is her first published book, though she has written all her life.
“As a little girl, I was asked what I wanted to be. I always wanted to be a children’s author,” she said. “But then life happened.”
She married, raised a family, and worked in the medical field for 50 years until she retired.
Bored with retirement, she took a part time job at the Lake Orion Kmart but injured her back about three years ago, which required surgery.
“While I was down, I decided, you know what, I’m going to write,” she said. “There wasn’t much else I could do.”
With three children and seven grandchildren, and experience as a Sunday school teacher and public school parapro, she decided to write a book for children.
“They always say, write about what you know, and I know children,” she said. “Children like to have books read over and over, so I wanted to make it fun to read with a lot of humor parents will understand as well.”
She has always shared stories of her childhood with family and friends, and they would say, ‘you should get that published,'” she said.
She researched how to set up a manuscript, and formatted and submitted her book publication.
“I told myself, ‘don’t take rejection personally.’ When I had a tough enough skin, I sent it in,” she said.
She received five rejection letters before Covenant Books of South Carolina called to say they wanted to publish the book.
“Writing is therapeutic. When I was writing, I was sharing memories with my brother and sister,” she said. “It was like mom and dad were still there.”
The story is set in the 1960s before tablets, DVDs, electronic devices, mandatory seatbelts, and the loss of natural settings to explore.
“That was a lot of fun, sharing how much toys are different from today, the TV shows and cartoons, toys we played with,” she said. “I have received a lot of positive feedback. It’s funny, cute, and charming.”
The book came out in January and has sold out twice so far, she said.
“More are on the way,” she said. “It has been a very exciting experience. I’m loving every minute of it.”
She hopes to write at least seven in a series of books for children. The manuscript for her second book is ready to go.
“I’m working on the blurb right now,” she said. “I’m halfway through the third, and Jenna has not even started kindergarten yet.”
Readers can purchase “Here Comes Little Jenna Jafferty” at local bookstores or online at the Apple iTunes store, Amazon, or Barnes and Noble.