“Making a big change in life is pretty scary. But know what’s even more scarier?…Regret.” – Zig Ziglar In May 2007 I walked through The Clarkston News door as a fresh out of college as a cub reporter. This Friday (Sept. 9) I will walk out the same door as a seasoned reporter setting off […]

New teachers in the classroom

More than 30 teachers and staff members have joined Clarkston Community Schools this fall, including Kathleen Alexander, who will be a counselor at Clarkston High School. Alexander went to Walled Lake Central. Shge lives in Howell, and graduated from Oakland University 2012, with a Master’s degree, counseling with school specialization. Previously she worked at Okemos […]

Elementary schools across the district held a “Meet the Teacher” last week where students got a chance to check out their new classrooms, find their seats and chat with their new teacher. Anderson Elementary was one of the schools that also had an “Ice Cream Social,” where students and parents got to catch up with […]

Rotarians learn about Power of Persuasion from author

Rotary District Governor Michael Angelo Caruso was the keynote speaker at the Clarkston Rotary Club’s Aug. 29 meeting. Caruso talked about The Power of Persuasion and how to engage someone in 15 seconds. Caruso, who is a motivational speaker and author, says 15 seconds is all that is needed for a person to make a […]

30 fresh faces in classrooms: Not including students

When kids return to their classrooms next week, more than 30 new teachers will help welcome them to the 2016-2017 school year. Great things are expected of them and the rest of Clarkston Community Schools teaching staff, said Superintendent Dr. Rod Rock. “It’s not easy to get a job as a teacher. Each of these […]

Teacher heading to Washington for award

Independence Township voters in Precinct 12 are getting a new polling location in Bay Court Park. Township Clerk Barb Pallotta said all Waterford School District voters from precincts 5, 8 and 9 were consolidated into Precinct 12 in November 2013. Since that time, Precinct 12 was moved from Clarkston Independence District Library to the Clarkston […] 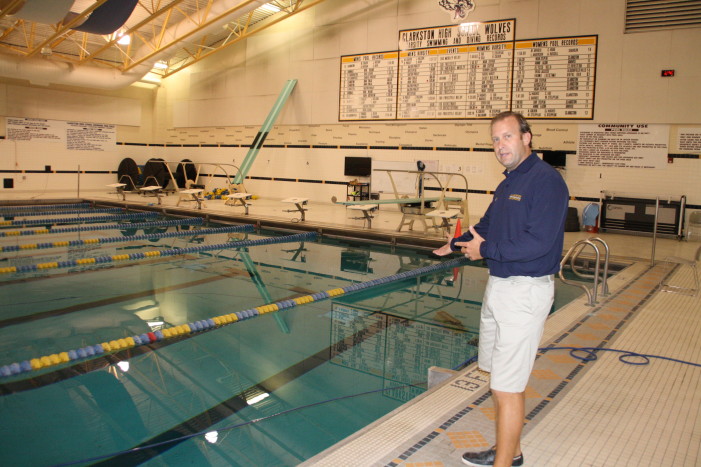 Athletic Director Jeff Kosin explains explains how the new pool robot works. Social media boiled over among swim parents last week as news splashed that both Clarkston High School Varsity Girls Swim team and Clarkston Sea Wolves club were without a coach. “It’s an outrage! The district has no idea how to run a USA […]

Independence Township Fire Chief Mitch Petterson said they’re looking to reduce the number of vehicles in their fleet, as part of the fire department’s Capital Improvement Plan (CIP) . The 23-year plan calls for $8.3 million in spending, of which over $1.9 million to be spent in 2017. Petterson said they are looking to sell […]