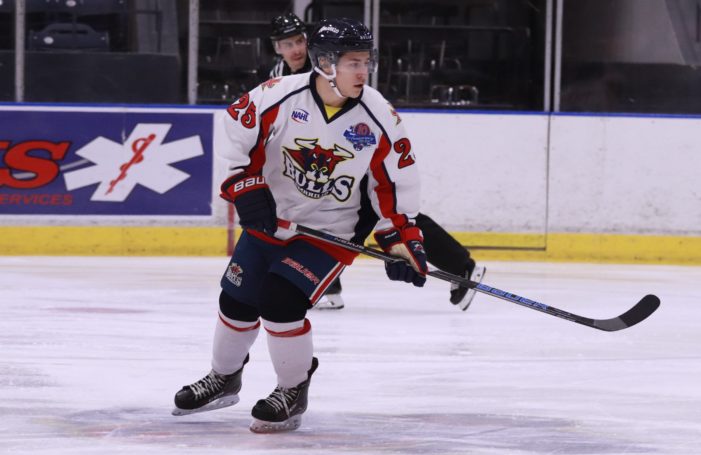 Ryan Tucker grew up in Clarkston but went to Brandon schools and graduated as valedictorian from Orchard Lake St. Mary’s in 2018.
Hockey was the one sport that Tucker said was always a huge part of his life, and it’s that passion that has taken him down to Amarillo, Texas, this season to play junior hockey for the Amarillo Bulls of the North American Hockey League.
“I was a free agent coming into Amarillo, but my coach the previous season, Nick Skerlick (with the New Jersey Titans 18U team), had a good relationship with Coach (Rocky) Russo and Coach (George) Lewis down in Amarillo,” explained Tucker. “I still attended the pre-draft camp and main camp and was officially selected for the team after main camp.”
The 19-year-old Tucker said he’s relishing the experience in Amarillo this season.
“Amarillo is a great city – a lot smaller of an area than Metro Detroit,” Tucker said. “It’s easy to get around, and it only takes about 15 minutes to get anywhere in the city. The hockey has been a lot of fun, there’s a great coaching staff and a great group of players that makes going to the rink every day really enjoyable. Also, it is cool to be able to see so many cities and states that I’ve never been to when we play games throughout the division. “
Other towns in the NAHL’s South Division include Albuquerque, N.M., Shreveport, La., Topeka, Kan., and Texas cities Corpus Christi, Odessa and North Richland Hills.
Tucker explained that his father played hockey and passed that right down to him.
“I’ve been playing almost my whole life, participating in street hockey and learn-to-skate programs since I was 3,” said Tucker. “Growing up, I played soccer, baseball, lacrosse, track, and cross country. In middle school, I only ran track and cross country and played lacrosse for a club team. In high school, the only sport I played other than hockey was lacrosse, and I only played freshman year.
“Hockey-wise, I played out of the Detroit Skating Club for the Eagles travel team growing up, and then I switched to play for the Birmingham Rangers for a few years. Finally, I went to the Orchard Lake United for one season before I went to high school and played for St. Mary’s. I never played Tier I until the year after I graduated when I played in New Jersey. My sisters, Emily and Madison, also started skating at a young age with me, and now my younger sister (Madison) plays for the girls 19U Honeybaked team.”
Growing up in Clarkston is something Tucker still reflects on from time to time, loving the childhood he was provided by his parents, Jim and Debbie.
“I really like all the parks and new sidewalks that are being installed,” Tucker said. “My family and I love to ride bikes and to be able to take paths into town is really nice. In the community, all the different restaurants are nice to be able to go to, especially Mr. B’s.”
Academically, Tucker’s time at Orchard Lake St. Mary’s was second to none.
“The teachers and administration made my time there the best four years of my life,” he said. “In every class, the teachers made us think critically and learn more than just information from textbooks. My hockey coach, Brian Klanow, was a major influence as I played so many years there. He didn’t only develop us to be good hockey players, but great people.”
Looking ahead, Tucker is hoping hockey can continue to be a major component of his life but is looking at secondary plans as well.
“Currently my main goal is to play hockey in college, but I haven’t decided specifically where yet,” said Tucker. “I haven’t determined what to do after that. Decisions and mindsets can always change so drastically and after four years of college, I’m not sure what I’ll want to do, whether I’ll keep playing hockey or find a job elsewhere.”