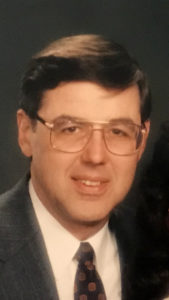 Fred Leroy Osborn, formerly of Oxford and born Aug. 2, 1943, passed peacefully in his sleep at home on July 15, 2019, after a long battle with Parkinson’s disease.
Fred was happily married to Jody (Beulah) Osborn for 54 years. He was a loving father to his two children, Catherine Hacala (Michael) and Chris Osborn-Rivera (Carlos), and the proud grandfather of Paige Porter (Russell), Nathaniel Ringlein and Julianne Ringlein.
In recent years, he especially enjoyed spending time with his two great-grandchildren, Norah (3) and Russell Porter (1).
Fred is also survived by his sister Beth McCormick (Carl), sister-in-law Barbara Glascock, and many nieces and nephews. Son of the late Leroy and Genevieve Osborn, Fred was born in Cass City, MI and raised in Pontiac. He attended Pontiac Northern HS and studied architecture at Lawrence Tech.
Fred and Jody lived in Oxford, Mich., for 30 years before moving to Rochester Hills in 2017. Fred loved to travel, go camping, gardening, and spending time with his family.
Visitation will be at 10:00 am on Monday, July 22, 2019 followed by a memorial service at 11:00 am in the Crucifixion Chapel at Christian Memorial Gardens West, 521 E Hamlin Rd, Rochester Hills, MI 48307.
The family wishes to thank Grace Hospice of Troy for all of their kindness. In lieu of flowers, donations can be made in Fred’s memory to Grace Hospice, Michigan Parkinson Foundation, or the Michigan Humane Society.