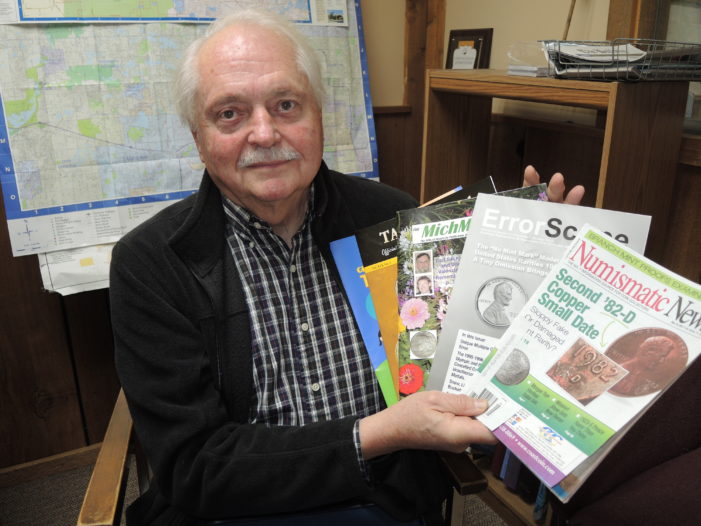 BY PHIL CUSTODIO
Clarkston News Editor
As a Kindergartener on the way to school in the 1940s, Chuck Sharp stopped by a gas station and asked the manager for some change for the penny peanut and gum machines.
Instead of using the changer on his belt, the man swept some coins from the till and put them in his hand.
“They were white, like silver. I was startled. ‘Hey, you gave me dimes,’” Sharp told him.
They were pennies, but zinc coated, issued during World War II to save on copper.
“That got me interested in coins. Since then, I wanted to learn all I could about them,” he said.
The longtime coin collector founded the Clarkston Area Coin Club for fellow numismatists interested in sharing their hobby. They meet the second Tuesday of the month from 6:30 -9 p.m. at the Church of Jesus Christ of Latter-Day Saints, 5464 Waterford Road off Maybee Road in Independence Township
“We have a dozen regulars now, a couple young folks. That’s the future,” Sharp said. “We’re a straight up educational organization, following the broad pattern of clubs formed in Huron Valley, Jackson, and Ann Arbor.”
They focus on education, grading, identification, and authentication of any coin or piece of currency.
“The history of it, why is it there, why not today, who’s on it, what caused that? There are many aspects,” he said.
They collect Indian and Buffalo pennies, two-cent pieces, three-cent pieces, a 20-cent piece, 2 ½ dollar gold piece, and countless other varieties.
“It’s possible to collect them with diligence. You have to be innovative, check with relatives, friends, fellow collectors with duplicates,” he said. “One fellow in the coin club goes to the bank and he gets rolls of change, and looks through them carefully.”
Coins with mint errors including filled dates, from when a die stress crack forms and metal oozes in, are very interesting.
Some mint errors can be valuable, such as a 1922 Lincoln cent with no mint mark.
“One cent could be worth hundreds of dollars to a collector,” he said. “When I was a kid I would cash my paycheck and get silver dollars. I still have one from 1952. It’s worn out, but it’s a memory.”
Plans for the club, which started in October 2016, include a kids camp on the Federal Reserve in the summer. Speakers, such as experts on Civil War tokens, are also on tap.
“During the Depression, times of war, any economic hard times, they use tokens – all kinds of money are used,” he said. “There’s adventure and excitement of discovery, even in change. It teaches persistence.”
For more information, call 248-345-8555.