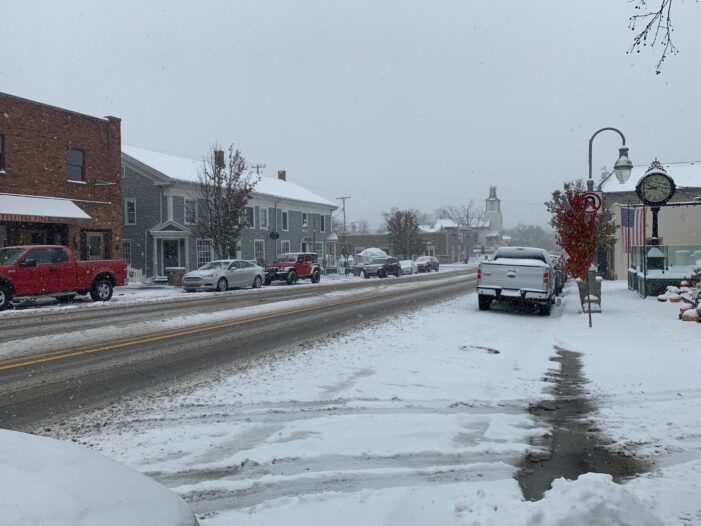 If you’ve ever been on Main Street in downtown Clarkston, you’ll notice the sights, the smells … and the heavy truck traffic.
City officials want to see if something can be done to alleviate what some call a problem.
At the end of March, Paul Ajegba, director of the Michigan Department of Transportation, sent a letter to Elissa Slotkin, 8th Congressional District Representative and resident of nearby Holly, to address the issue that Slotkin, by way of Clarkston Mayor Eric Haven, initially brought up to Ajegba in February during a visit to Washington D.C.
Ajegba said Slotkin’s suggestion to divert large truck traffic and remove M-15 as a designated truck route has been reviewed and evaluated by MDOT.
“Currently, M-15 is designated as being on the National Network (NN) from US-24 (Dixie Highway) to M-24 in Bay City,” said Ajegba. “Since it is on the NN, truck traffic cannot be restricted. If M-15 was not on the NN, then restricting truck traffic would be strictly up to the local and/or state jurisdiction, depending on state law regarding powers of local jurisdictions.
“In order to restrict truck traffic on M-15, it would have to be removed from the National Network. Removing M-15 from the National Highway federal aid system would be an extensive process which includes providing justification for removal to the FHWA Division Office and publishing the proposed deletion in the Federal Register as a Notice of Proposed Rulemaking.”
Requests for rulemaking must include information regarding the safety record for the segment such as above normal crash rates and severity and the how truck traffic is aggravating the existing crash problems.
These requests also must include information about the geometric, structural or traffic operation features that may preclude safe and efficient operation, availability of a reasonable alternate route, identification of operational restrictions in lieu of removal, and any previous truck restrictions prior to 1983, said Ajegba.
“It should also be noted that if M-15 is deleted from the National Network, it would not be eligible for federal transportation funding,” noted Ajegba. “To address the question of possible operational solutions for M-15, MDOT reviewed the crashes related to heavy trucks. Over the last three years, there were four crashes involving large trucks of which one hit a building. When evaluating crashes, the data is reviewed to determine whether certain types of crashes exceed normal ranges based on data observed for similar roads in similar environments or whether there are specific crash patterns.
“Then potential contributing factors would be identified and analyzed for possible ways to mitigate them.”
According to Ajegba, based on MDOT’s review and analysis of the data concerning crashes on M-15 in Clarkston, a crash pattern outside of the normal range for similar roads was not identified.
Currently, M-15’s speed limit is posted at 30 mph through downtown Clarkston.
“MDOT will evaluate whether a possible reduction of the speed to 25 mph and/or increasing enforcement of the speed limit would reduce the frequency of large truck crashes,” Ajegba said.

What is your take
on this issue?

Is Main Street
a dangerous road?

Let us know at ClarkstonNews@gmail.com