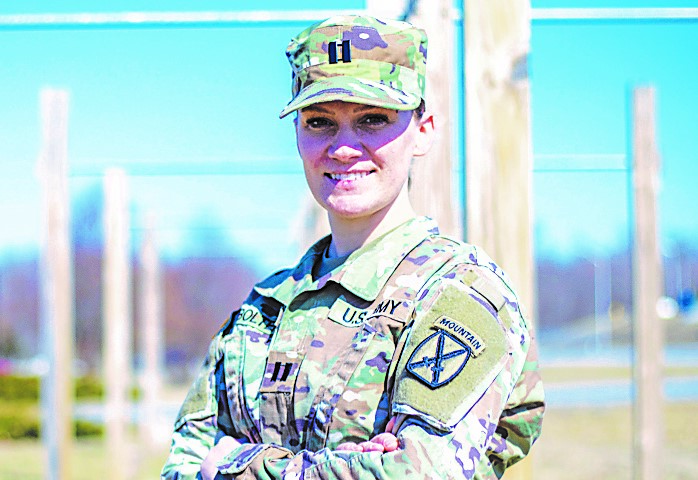 When U.S. Army Capt. Justine Bolten found out she was pregnant in August of 2020, like most women, she was filled with happiness and joy.
However, there was an underlying feeling of anxiousness about this new chapter in her life.
“It felt like I was just starting my career, and now it was ending,” said Bolten, a Clarkston native, 2009 Clarkston High School graduate, and an occupational therapist assigned to the 10th Mountain Division Sustainment Brigade, 10th Mountain Division. “At that time, I was so new to the Army, and it just felt a bit scary.”
Bolten, who commissioned in the Army in January of 2020, added the feeling of nervousness came from the fear of being separated from her peers.
“As a pregnant soldier, you are non-deployable, and so you begin to feel ‘like what good am I for,’ and that really affects you mentally,” she said. “I also never really thought about being a mom. I have always been career-driven, so when I found out I was pregnant, it was very much a surprise.”
In April of 2021, Bolten and her husband, Adam, also a 2009 CHS graduate and infantry commander 10th Mountain Division, 2nd Brigade Combat Team, welcomed their son Liam into the world.
A month before, the U.S. Army announced an exception to policy that extended the timeline for postpartum soldiers to meet body fat standards from 180 days to 365 days.
“At six months, soldiers are sometimes taking dramatic and at times dangerous measures to meet standards that can impact their health and their baby’s health,” Bolten said. “The policy, I think, helped take away that unhealthy pressure.”
Now more than a year later, the U.S. Army implemented a new parenthood, pregnancy, and postpartum directive, which updated regulations to help support all Army parents and families. Among the updates was the postpartum body fat standards extension.
Bolten, whose postpartum period ended in April of 2022, said the extension gave her the support and time to succeed.
“One year is a great time frame to be able to perform as a soldier again in a healthy manner,” she said. “It gave me time to learn how to navigate being a mom while also still being a wife to my husband and provider for the soldiers in my unit.”
Bolten noted many influential reasons why she decided to join the Army, with her husband being at the top.
“While I was a student, I worked with active duty and veterans on their rehabilitation process from upper extremity injuries to traumatic brain injuries to gain their independence and improve the quality of life,” said Bolten. “I love being an occupational therapist, but being an Army OT is incredibly fulfilling and gives me so much more purpose with my skills. My current OT position in the Army is part of a new Army program called Holistic Health and Fitness (H2F), focusing on the whole soldier and their overall health and well-being.”
In May, Bolten earned her first Expert Field Medical Badge, and plans on staying in the Army for the foreseeable future. She has never forgotten where she came from, however.
Adam’s parents, Larry and Karen Bolten, and Justine’s parents, Arden and Sandy DeZess, reside in Clarkston.
“Since we move all over the country while serving, coming back to Clarkston provides a sense of comfort and familiarity,” Bolten said. “I love visiting my roots and reminiscing on our childhood. Adam and I can’t wait to show our son and future children where grew up.
“Clarkston will always be home.”