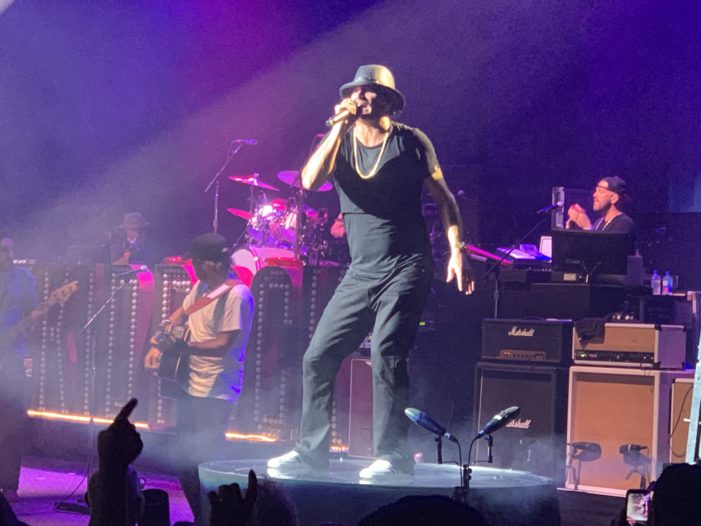 As temperatures began to dwindle into September, Kid Rock kept the summer heat going at DTE Energy Music Theatre with four concerts on Sept. 6-7 and 13-14.
As has become the norm, the shows were packed all the way around – from the pavilion into the lawn, and the rocker kept the crowd electric all night.
He sang many of his classic hits, including “Born Free,” “Wasting Time,” “All Summer Long,” “Devil Without A Cause” and “Picture,” which he sang with backup singer Stacy Michelle. He also performed “Bawitdaba” as his signature encore.
The crowd also cheered for Eddie Money as Rock sang Money’s “Shakin,’” all in honor of the rocker whose death was announced earlier that day, Sept. 13.
Eddie Money opened the concert season at DTE, and Pine Knob before that, for decades, Rock noted from the stage.
“Pine Knob was pretty much Eddie’s second home,” said Rock, as a graphic with Eddie’s photo and 1949-2019 was displayed on the screen.
For anyone who has been to Rock’s shows over the years, much of his set list, conversation on stage and swagger was predictable and the same he’s been doing for years.
That’s not a bad thing, however. He also referred to the venue as Pine Knob several times, something that elicited cheers from the crowd, which was seemingly made up of fans of all ages.
The Twisted Brown Trucker Band, made up of several locals, was spectacular as always, and each member was recognized by name midway through the shows. The shows were opened by Blackberry Smoke the second weekend and Lee Brice, the first.