Wolves taking to the gridiron? 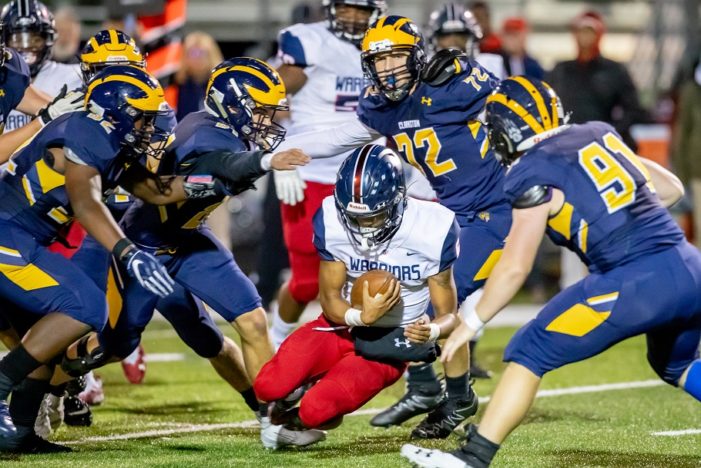 BY WENDI REARDON PRICE Clarkston News Sports Writer Gridiron heroes are scheduled to open the fall season against Pinckney in the fifth annual Battle at the Big House, Aug. 27. Amid the coronavirus pandemic and Governor Gretchen Whitmer extending the stay-at-home order to June 12, coaches and players are preparing to have a season. “We […]

The Clarkston Varsity Football team lost to Lake Orion last Friday during Football for a Cure, 55-21. The Dragons jumped to a 13-0 lead within the first few minutes, scoring on their first possession as they covered 91 yards in four plays, 66 seconds into the game. The next score came when the Dragons blocked […]

Crosstown rivals Clarkston and Lake Orion will battle this week on the gridiron while also raising money at the 11th Annual Football for a Cure, Friday. The Clarkston Varsity Football team goes into the game looking to protect their turf and also for a win after a 28-27 loss to Rochester Adams last Friday. Freshman […]

The Mountaineers were victorious in another win on Saturday afternoon as they defeated Waterford Our Lady of the Lakes at Wisner Stadium, 35-12. The Clarkston Everest Varsity Football team jumped to a 14-0 lead in the first quarter, scoring off two26-yard touchdown passes from Giovanni Mastromatteo to Joey Thibodeau, and two PATs made by Fernando […]

Clark gives his all for winning two-pointer at Homecoming

BY WENDI REARDON PRICE Clarkston News Sports Writer Cheers erupted from the sidelines and stands as freshman Ethan Clark scored a two-point conversion to seal a 22-21 overtime win over Southfield at the Wolves Homecoming game on Friday. “It felt amazing,” said Clark. “I just gave it my best effort and got into the end […]

BY WENDI REARDON PRICE Clarkston News Sports Writer It was a battle of blue and gold as the Wolves faced off at Oxford last Friday and prevailed with a 33-28 win. As players and fans cleared the stands after the earlier game with incoming heavy rain and lightning on the horizon, longtime head football coach […]

Wolves off to Oxford

Clarkston’s gridiron heroes are looking for their next win as they head to Oxford this week “Oxford always plays us tough,” said long-time Clarkston Varsity Football Head Coach Kurt Richardson. Both the Wolves and the Wildcats walked away from the field Friday night with shutout losses to their foes. Clarkston lost to West Bloomfield on […]

It was back to work on Monday at practice after the Clarkston Varsity Football team lost to Oak Park in an OAA crossover game last Friday, 64-41. Oak Park opened the night with a touchdown off a kick return and with a 2-point conversion, putting the score 8-0 in the Knights’ favor. Senior Nic Miller […]

BY WENDI REARDON PRICE Clarkston News Sports Writer Clarkston’s gridiron heroes ran to the student section to celebrate with the Jungle their big 51-7 win in their home opener against Bloomfield Hills last Friday night. “It was a team effort,” said junior Jack Gurn. “After the tough loss against Southfield, we came back and battled […]