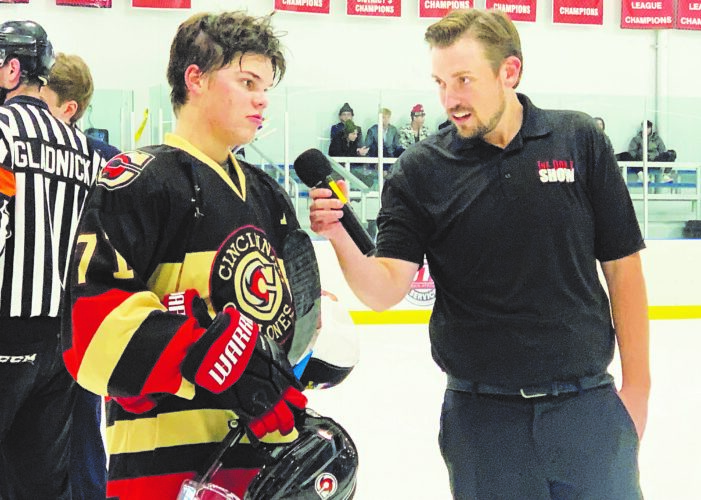 After playing three seasons in the United States Premier Hockey League, Clarkston native Brendan Walk is off to play NCAA hockey, committing over the summer to Fitchburg State University.
Walk, who played the 2021-22 season for the Cincinnati Jr. Cyclones after two seasons in Wisconsin skating for the Hudson Havoc, will pursue a business major at the Massachusetts school
“The USPHL Premier was a great experience for me,” Walk said. “It prepared me well for success at the next level. My time in Cincinnati under coach Jim Mitchell and in Hudson under Brett Wall really helped prepare me for college. My goal going into juniors was to play Division III college hockey, and when I visited Fitchburg, I knew that’s where I wanted to be.”
In his junior career, Walk scored 44 goals and 99 assists for 143 points in 107 games, tying him for 23rd on the all-time league points list. His assist total is tied for 13th in league history.
“I really want to thank my family, friends, coaches, and billets for helping me down this road,” Walk said. “None of this would have been possible without their support and pushing me to be my best.”
Walk finished the 2021-22 season with 19 goals and 42 assists for 61 points in 39 games. His 61 points were good for second on the team.
“Brendan was really a leader for us this (past) season,” Mitchell said. “Fitchburg is getting a great player and I know Brendan will be a great fit there. The Cyclones organization wishes Brendan the best at the next level.”
Growing up, Walk played travel hockey for the Oakland Jr. Grizzlies, Metro Jr. Jets and Jimmy John’s associations before suiting up in Clarkston school colors for his senior season during the 2018-19 campaign.
Graduating with a 3.75 GPA in 2019, Walk also attended Bailey Lake Elementary, Sashabaw Middle School and Clarkston Junior High.
— Cincinnati Jr. Cyclones Staff

PHOTO: Brendan Walk gets interviewed last October by Dan Kmiechick of the Dan K Show after the Cincinnati Jr. Cyclones picked up a win at the USPHL Detroit Showcase, which was held at Mount Clemens Ice Arena. Photo: Matt Mackinder