Ski teams ‘excited for the season’

BY WENDI REARDON PRICE Clarkston News Sports Writer The weather is getting colder – just how the Clarkston High School Ski teams like it so they can hit the slopes for the winter season. “I am excited for the season,” said Brian Popelier, head coach, adding Pine Knob Ski Resort, where they practice and race, […]

BY WENDI REARDON PRICE Clarkston News Sports Writer The Wolves battled Marian in the first game of the season and walked away with a close loss to a tough team. “It was good,” said Clarkston Girls Varsity Basketball Aaron Goodnough about the 54-48 loss. “We started out fine. We were even with them after the […] 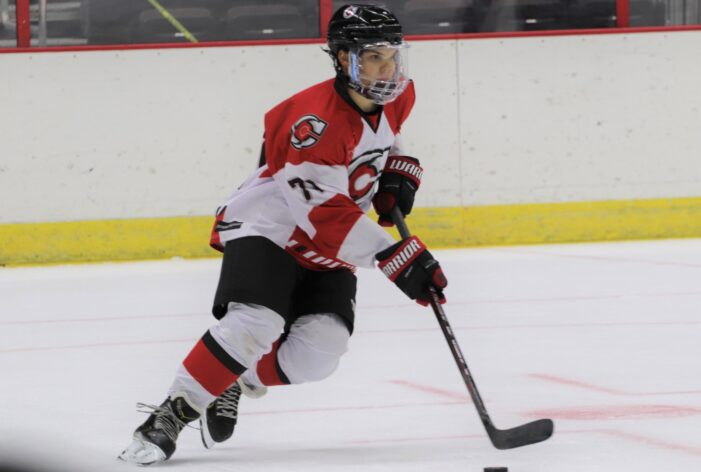 BY MATT MACKINDER Clarkston News Editor Brendan Walk averaged better than a point per game as a senior on the Clarkston hockey team in 2018-19, compiling 33 points in 24 games that season. He parlayed that season into an opportunity to play junior hockey with the United States Premier Hockey League’s Hudson (Wis.) Havoc the […]

Clarkston girls hoops set to tip off this week

BY WENDI REARDON PRICE Clarkston News Sports Writer Wolves jump into the girls basketball season with their first pair of games this week. They opened with a non-conference game against Birmingham Marian on Monday. “Marian is consistently good,” said Aaron Goodnough, head coach for Clarkston Girls Varsity Basketball. “It will be a good game. It […]

Clarkston Varsity Hockey opened the 2021 Thanksgiving Tourney at Cranbrook with a 3-2 overtime win over Detroit Country Day on Friday. Both teams ended the first period scoreless then scored one goal each in the next two periods. Cristian Walk led with one goal and one assists. Ron Wade and Devon Collis had one goal […]

BY WENDI REARDON PRICE Clarkston News Sports Writer Icers opened their first week of games with a 1-1 split. Clarkston Varsity Hockey shut out Stoney Creek last Friday, 8-0, putting five goals in the net in the first period and following it up with three goals in the next period. “It was a big win […]

Clarkston freshman swimmer and divers off to states

BY WENDI REARDON PRICE Clarkston News Sports Writer Freshman Rylee Harris is heading to the MHSAA Girls Division 1 Swimming and Diving Finals this Friday and Saturday in Holland. Harris qualified for the state meet in the 100-yard freestyle during the OAA Blue League Meet as she finished in first place in 54.14. “I couldn’t […]

Clarkston Everest Collegiate finished the football season on Saturday in a 38-12 loss to Ottawa Lake Whiteford. The Mountaineers opened the MHSAA Division 8 Region 4 championship game on a 1-yard touchdown. Ottawa Lake Whiteford tied the game on their own touchdown, 6-6. Everest scored again on a 19-yard run to close the first quarter […]